Ford: Aiming to achieve volume production of driverless vehicles in 2021 for ride-sharing

In September 2016, Ford outlined its mid- to long-term growth plan. The automaker will aggressively expand into the areas of electrification, autonomous driving, and mobility services, and at the same time fortify its core businesses (passenger vehicles, trucks). This report will introduce the OEM's plans to enter new fields.

According to Ford, the shift "from a society of car ownership to a society where ownership and sharing coexist" is progressing rapidly. The automaker will respond to this with its vision to become "an auto and a mobility company." From now on, rather than just focusing on how many cars it sells, Ford will also give attention to what kind of mobility services it offers.

Although the market size of the traditional car market globally is USD 2.3 trillion (JPY 265 trillion when USD 1 = JPY 115), the size of markets like mobility services that Ford has not yet entered amount to USD 5.4 trillion (JPY 620 trillion) and is expected to be a significant source of revenue from now on. The automaker's policy for its mobility services is to focus on cars, while covering everything from bikes (electric assisted bicycle), to shuttles (on-demand service of minibus with a riding capacity of 10 people or less) and buses.

As for technology, Ford will fortify its electrification and autonomous driving capabilities. The company predicts that the market will be divided into approximately 3 segments consisting of internal combustion engine vehicles, HVs, and zero emission vehicles (ZEVs) in 2030 due to technological advancement and cost reductions for electrification.

Regarding autonomous driving, Ford is planning for annual production of approximately 100,000 units of fully autonomous, SAE level 4-capable (full autonomy in defined areas) driverless vehicles for ride-sharing. This is expected to have a major impact as the cost of the driver, which is the largest for ride sharing, will become zero. Ford predicts that 20% of U.S. car sales will be autonomous vehicles in 2030.

In September 2016, Ford outlined its mid- to long-term growth plan. Ford will invest in new business opportunities in the areas of electrification, autonomous driving, and mobility services, while also fortifying core businesses such as pickup trucks, SUVs, and commercial vans.

According to Ford, although the size of the global market for traditional automobiles is USD 2.3 trillion (JPY 265 trillion at a rate of USD 1 = JPY 1), the potential market for mobility services and the like is projected to be USD 5.4 trillion (JPY 620 trillion). As the OEM does not have any share in these services, it plans to strengthen its capabilities in them as soon as possible to establish a significant source of revenue for the future.

Electrification and autonomous driving is expected to fortify both Ford's core businesses and its mobility services.

Ford was the led sales for PHVs in the U.S. in 2015, and ranked second for cumulative units of electrified vehicles (total HVs, PHVs and EVs) in the US.

In December 2015, the automaker announced that it will invest $4.5 billion and introduce 13 new electric vehicles by 2020. The product line of electrified vehicles is expected to reach 40% of the company's entire lineup in 2020.

Ford predicts that the price per kWh of EV batteries will fall from $120 in 2020 to $85 for the latest lithium-ion batteries in 2030, and to $75 for post-lithium-ion batteries. The company expects that when the costs of owning an EV will fall in comparison to those of an internal combustion engine vehicle as a result of technological innovation and EV mass production. At the same time, the cost of owning an internal combustion engine vehicle is expected to rise due to the tightening of regulations and increased fuel costs. As a result, the cost of owning both kinds of vehicles will become closer in the mid-term.

Ford predicts that the market will be divided into approximately 3 segments consisting of internal combustion engine vehicles, HVs, and ZEVs.

Ford announced that it will introduce high-volume, SAE level 4 autonomous vehicles in 2021 for ride-sharing.

The autonomous vehicle introduced by Ford in 2021 will be developed exclusively for ride-sharing. It will have no pedals or steering wheel and be intended for "fully autonomous driving in designated areas." The vehicle will cover areas created by LiDAR with a high-resolution three-dimensional map. Ford plans to start operations in major cities in North America including urban and corridor areas in New York City and Detroit City (elongated areas centered on the highway), and expand the use of the vehicle around the world in the long-term.

From the summer of 2016, Ford has provided autonomous vehicles based on the Ford Fusion Hybrid, which are the current test vehicles for autonomous driving tests Uber is conducting in Pittsburgh, Pennsylvania, where customers who wish to do so actually get to ride in autonomous vehicles. Although the vehicles have SAE level 4-level functionality, Uber employees ride in them as drivers (Ford calls these safety drivers) as a precaution.

The introduction of autonomous vehicles will have a significant effect on mobility services. Although the cost per mile is currently USD 2.50 for Uber's ride sharing, it is expected that autonomous driving will reduce this to about USD 1.00.

The sale of autonomous vehicles to individuals is expected to begin a few years after 2021 at the earliest.

With Ford's current ride sharing plans it is possible to limit use of autonomous vehicles to areas for which high definition 3D maps have been created, and the move to driverless automobiles (unmanned taxis) will enable significant cost reductions. The advantage of this is that the costs of equipping the vehicles with autonomous driving technology will be absorbed, and Ford will expect to be able to profit from these models.

However, Ford predicts that the realization of level 5 (fully autonomous driving without any conditions) will only be realized further in the future. Introducing level 3 or level 4 autonomous vehicles for individual customers will involve the following challenges, and it is not certain that Ford will be able to achieve the scale of production needed to produce a profit.

Ford has significantly strengthened its autonomous driving technology development system. The automaker announced that it will invest in and collaborate with four start-up companies on 3D maps, LiDAR, radars, and core camera technologies. Including these four companies, Ford is collaborating with over 40 start-ups.

Ford will also expand its research facility in Palo Alto (Silicon Valley). The OEM will construct a new research building and double the current headcount of 130 employees.

Regarding autonomous driving test vehicles based on the Fusion Hybrid sedan, Ford has increased the number of active units from 10 at the beginning of 2016 to 30, which is the largest fleet of all automakers. Ford is running tests in California, Arizona, Michigan, and plans to increase the number of test vehicles to 90 units in 2017. The company has also been conducting tests on snowy roads and at night.

Source: Ford press release on August 16, 2016
Note: Ford will use the technology obtained from these partnerships not only for future autonomous vehicles but also for improving ADAS technology in vehicles currently on sale.

The environment around automobiles is quickly moving from the era of ownership to one where vehicles are both owned and shared. Ford will respond to this by becoming "an auto and a mobility company" that provides mobility services even as it expands sales of its vehicles. It will lead the Ford Group in the fields of connectivity, mobility, and autonomous driving, and will enter the new field centering on mobility services, which have already become a USD 5.4 trillion market.


Expanding into shuttle and bike sharing in major cities

Ford aims to build a wide ranging business model that covers modes of transport including bicycles, automobiles, shuttles, and buses.

Ford will expand into the sharing business for shuttles and bikes (electric assisted bicycles) in major global cities starting with San Francisco. The company established a City Solution team as part of Ford Smart Mobility LLC. Half of the world's population currently lives in cities, and this ratio is expected to rise to 60% by 2030. Ford aims to play a part in solving the problem of metropolitan traffic, while also acquiring new customers and expanding its future profits.

Although a shuttle usually refers to "a bus that operates in short intervals with specific destinations like at an airport or event venue," Ford will operate an on demand mini bus called Dynamic Shuttle with a capacity for 10 passengers. The automaker aims to offer a premium traveling space with more cabin room for each person than public buses to improve the boarding ratio (actual passenger capacity/riding capacity).

Bike sharing is an integral part of the diverse transportation Ford is aiming for.

The automaker plans to introduce a new bike that is being developed in the spring of 2017 and increase the number deployed in the San Francisco Bay Area from the current 700 to 7,000 by the end of 2018.

Expanding into the sharing business in major global cities

Expanding into the bike sharing business 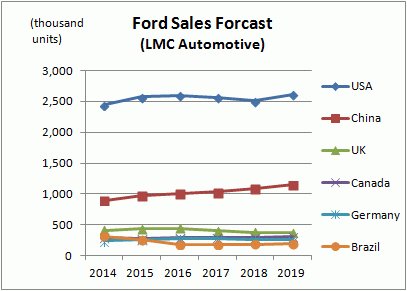 In the US, the largest market for Ford, the company is expected to see share rise over the course of LMC Automotive's forecast. Ford's market share will rise to 14.9% in 2019 from 14.8% in 2015 and will capture more from 2020 on. Growth will be aided by the expectation that the automaker will add numerous new entries to both Ford and Lincoln brands as a part of the series of model launches noted above. Ford plans to add a dedicated hybrid model in 2018, which will come as the C-Max exits. It should be more competitive with the Prius. A Small SUV will be introduced in 2019. The research company does not expect Lincoln's share to increase substantially, especially with new competitors entering the Premium segment from Alfa Romeo, Genesis, and expanding Tesla line-up.

In China, the second largest market for Ford, sales in 2019 will increase to 1,150,000 units from 973,000 units in 2015. Ford Group's sales in Chinese market are set to see ongoing growth, particularly for the Lincoln luxury brand. Indeed, Ford is currently in talks with partner Changan Automobile Group about the production of Lincoln models at the Chongqing facility. This could begin as early as 2018, provided that Lincoln continues its strong growth trajectory in China, where it got off to a rapid start last year. However, no agreement has been reached on key points such as profit-sharing, and it may take until 2020, or later, for the first Lincolns roll off the line in China.

Ford is set for a year of robust European sales in 2016, with the effects of Brexit likely to be postponed until 2017 and beyond. The UK is the biggest European car market for Ford, but the ramifications of Brexit could see the US brand lose valuable UK market volume in coming years. LMC Automotive expects market share in European market to hover just below 8% in 2016, and remains around this level until model-ageing effects start to take hold.