Are fuel cell vehicles (FCVs) the solution to environmental and energy challenges that motorized society is facing? Companies such as Ballard, Daimler, and General Motors (GM), have conducted research on FCVs from many years back. Previously, GM sent researchers to the Los Alamos National Laboratory, which is known for developing nuclear weaponry, to conduct research on fuel cells as part of a national project. Fuel cell powertrains replace the internal combustion engine (ICE), which is the heart of the vehicle, and utilize the electricity generated when hydrogen and oxygen combine to form water to power the drive motor. In rocket science, fuel cells have been researched and put into use by the military and space industries, but there are many challenges remaining that need to be overcome to apply this technology to vehicles for mass consumption. Will fuel cells come into wide use around the world in the same way the Global Positioning System (GPS) did in mobile phones and navigation systems? The debate on which comes first, cars or infrastructure, applies not only to electric vehicles (EVs) but also to FCVs. This report will summarize the trends and challenges of FCV development.

At the FC EXPO 2016 Technical Conference in March, Japanese, U.S., and European automakers reported on FCV development trends. All of the companies in attendance have conducted research and development on FCVs for many years.

Since the production of its first fuel cell test vehicle in 1964, GM has conducted FCV running tests for a total of 3 million miles as of May 2014. GM announced that it will modify the Chevrolet Colorado pick-up truck into an FCV (first-generation) and provide it to the military on a trial basis in 2016 for 12 months of road testing.

In Japan, growing momentum can be seen for popularization of the vehicles with the launch of Toyota and Honda's new FCVs being accompanied by moves in the public and private sector to promote them, including support from the Ministry of Economy, Trade and Industry (METI), and planned use at events like the 2020 Tokyo Olympic Games.

Toyota announced that one month after the Toyota "Mirai" FCV was launched in December 2014, the automaker received orders for approximately 1,500 units. The company will increase its annual production capacity from 700 units to 3,000 units in 2017. Toyota expects that the annual global sales volume of the Mirai will be 30,000 units or more from 2020 onward (monthly sales volume of 1,000 units or greater in Japan). The automaker will expand its hybrid electric vehicle (HEV) technology to its EVs, plug-in hybrid electric vehicles (PHEVs), and FCVs. It has proposed that electrified vehicles be used in a separate environment in the expected hydrogen society. 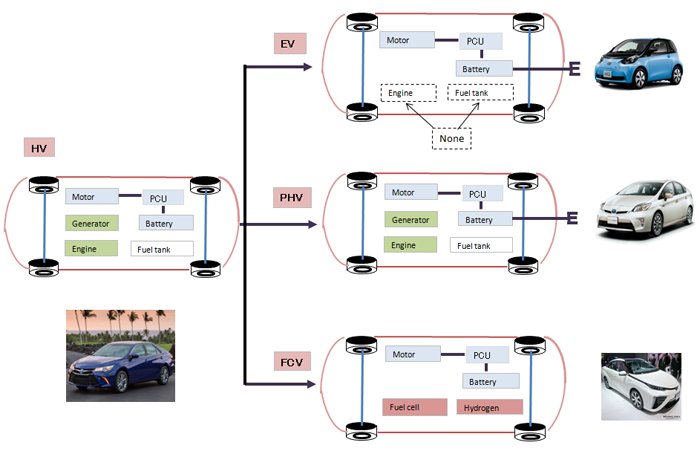 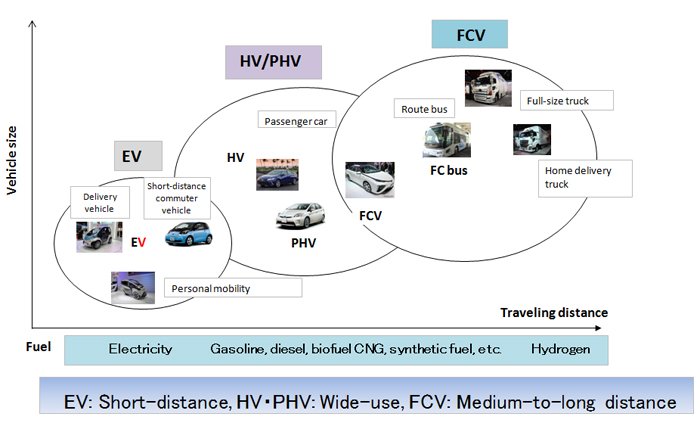 Honda began leasing the Clarity Fuel Cell in March 2016. The automaker aims to lease around 200 units in 2016. Following the machine-minimum (MM) concept, a downsized fuel cell powertrain (comprised of a fuel cell stack, drive unit, FC boost converter, and electric turbo air compressor) that is the size of a V6 engine has been put in the engine room, making more room for the cabin.

An aluminum-lined hydrogen tank (a plastic three-layer tank that uses carbon fiber reinforced plastics [CRFP] has been adopted for the Toyota Mirai; see the Note below) with a filling pressure of 70 MPa has been adopted. It is the first in the world to achieve zero hydrogen permeation. 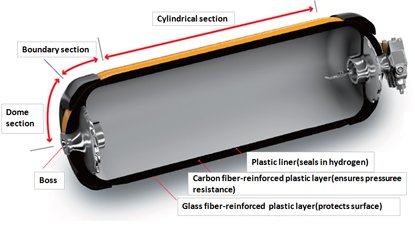 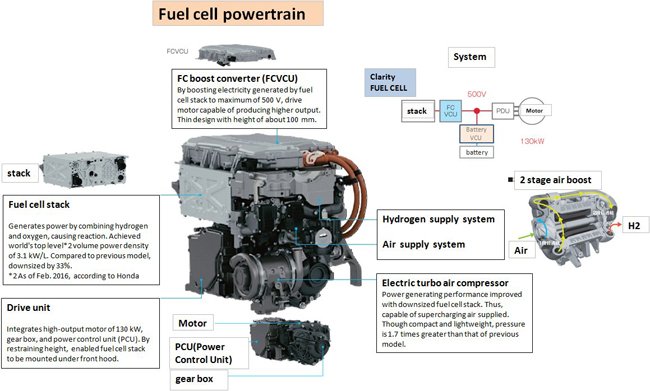 Honda's creativity can be seen in innovations like the way air and hydrogen flow all through the fuel cell stack's interior cells, cell minituarization, and densification. The fuel cell stack is made thinner, and it has a unique structure where one unit (two cells) is made by combining two membrane electrode assemblies (MEAs) and three separators. By directing the flow of hydrogen and air in the opposite direction and reducing the width of the flow passage, the amount of water that develops during power production has been reduced, which improves power generation performance during sub-zero temperature start-up. 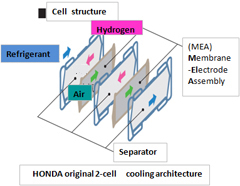 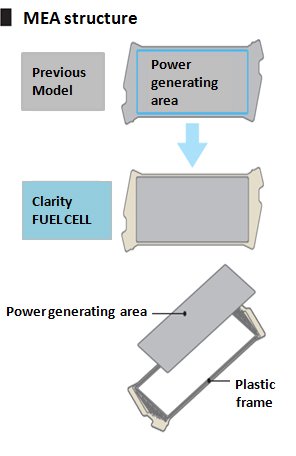 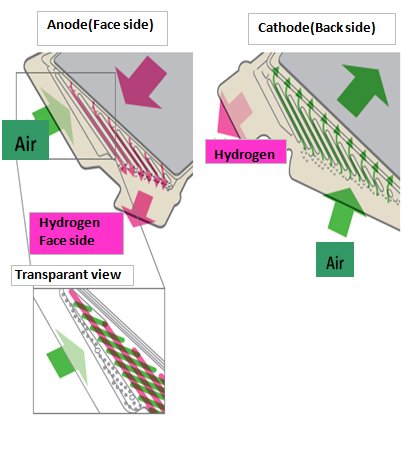 The amount of expensive MEA material used has been reduced 40% by switching the framework material (excluding the power generating portion) to plastic resin, which reduces costs and improves fuel cell stack productivity.

Impressive weight reduction has been realized in areas other than the fuel cell system. Along with making it so the drive motor has higher output and produces less noise, other changes include the first adoption for four-wheelers of an "aluminum hollow die-cast front sub-frame," use of high-strength forged-aluminum tie rods (another first) to lighten the suspension, and replacement of steel materials with aluminum. 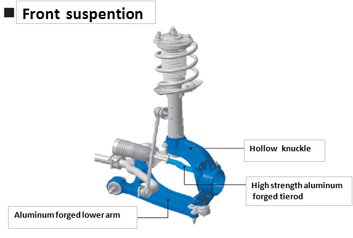 (Created by MarkLines based on Honda press release)

Hydrogen infrastructure is also being developed in the U.S. (California) and Germany, but this report will only look at the Japanese context. In 2015 progress was made towards a goal of establishing a total of 100 hydrogen stations in four metropolitan areas and along the highways that connect them, but only 82 were built, and completion of the project was delayed by one year to 2016. In March 2016, METI completed a revised version of its "Strategic Road Map for Hydrogen and Fuel Cells." For the first time, FCV growth targets were clearly specified at 40,000 units in 2020, 200,000 units in 2025, and 800,000 units in 2030. Hydrogen station targets were also revised to increase to 160 stations in 2020 and 320 in 2025.

Honda is expanding the installation of its smart hydrogen stations (SHSs). The automaker has increasingly shifted to building package-type SHSs that are easier to install over on-site generation type hydrogen stations that use solar energy.

The automotive industry is pursuing electrification as the ultimate answer for vehicular power technology to deal with challenges related to the environment, C02, and energy on a global scale. This intersects with the Japanese government's policy from an energy security perspective of seeking means to end oil dependence. While there are many ways to make hydrogen, a plan create liquefied hydrogen from brown coal overseas and import it to Japan is being considered.

The two reasons are:

(1) Compared to gasoline, hydrogen has a "lower outflow of value to overseas."

* Fuel expenses for traveling 10 km in a gasoline HV: around JPY 90

* Fuel expenses for an FCV traveling the same distance are around JPY 60 (JPY 1,100/kg)

In the case of gasoline, the total cost of a gas station (black area), refining the gas in Japan, and moving it to the transport station (white area) amounts to approximately JPY 27 (35%).

In the case of hydrogen, the cost for hydrogen stations (black area), and producing and transporting the fuel in Japan (white area) amount to approximately JPY 40 (65%). This means the amount of money that returns to Japan from fuel expenses paid by users is larger for hydrogen.

This is based on the assumption that the Japanese automotive industry is competitive in the development and manufacturing of core FCV components (fuel cell powertrain systems, tanks, electric parts, etc.) and systems.

Brown coal contains a large amount of liquid and low carbon content of 70 to 78%. For this reason, it is usually not mined. However, companies like Chiyoda Corporation, Kawasaki Heavy Industries, and IHI are researching a plan where brown coal would be mined and made into liquefied hydrogen in Australia, and this would subsequently be exported to Japan in specialized ships.

Chiyoda Corporation started its hydrogen transport business from the end of 2015, and Kawasaki Heavy Industries will start full-scale operation of its supply chain from 2030. The import cost will be approximately JPY 30/Nm3 when these businesses are in operation, and a large amount of cheap hydrogen will be supplied that is CO2 free.

The biggest challenge for FCVs is cost. In 2008, Toyota started leasing the FCHV-adv, but the cost of the fuel cell system for the Mirai (launched in 2014) has been reduced to as low as 1/20 in comparison. The Mirai is sold at a price of JPY 7.24 million (including consumption tax). Even with a subsidy of approximately JPY 2 million, the sales price exceeds JPY 5 million. Furthermore, even if 30,000 units per year are sold globally from 2020, this will still fall far below the 300,000 units needed to achieve economies of scale (EOS) in the automotive industry. Because of this automakers are partnering up to launch FCVs.

Currently GM and Honda; BMW and Toyota; Volkswagen (Ballad) and Shanghai Automotive Industry Corporation (SAIC); and Ford, Nissan, and Daimler are partnering up to lower costs through means such as sharing R&D expenses and component systems, and mass production.

* GM will launch a vehicle jointly developed with Honda around 2020

* BMW and Toyota will jointly develop a vehicle

* Nissan will launch a vehicle jointly developed with Daimler in 2017

The image above is an excerpt from GM's presentation at the FC-3 Technical Conference. Automakers start conducting research on new technologies. New technologies proceed to the design and development phase where they are applied to products. The product goes into production at plants and then are passed on to customers. Until the successful commercialization of the new products, automakers continue to accumulate investments. "Death Valley" is the point where the maximum losses are reached for the amount spent until the successful commercialization of the new product. At this point investment costs start to be recovered, and the company begins to profit when the accumulated losses are reduced to zero. Automakers are formering partnerships in order to rapidly move into the blue zone on the right of the image.

Hydrogen will need to be properly managed according to the following principals.

1. No leaking
2. Detection if there is a leak
3. No accumulation
4. No inflammation


Where to from here?

According to the new strategic roadmap put together by METI, Japan will enter a second phase of FCV implementation from around 2020, when the Tokyo Olympic Games will be held. The national strategy is to expand cooperation between industry, government, and academia to build a full-scale hydrogen society. The question of whether FCVs are a solution to global environmental and energy challenges will be tested over the next 20 to 30 years.

To make FCVs successful and realize a hydrogen society without environmental or energy issues, "Death Valley" must be overcome through joint efforts by industry, government, and academia under a national strategy; standardization; and the provision of incentives to continue OEM partnerships. This may be the era of searching for silver linings in dark clouds.