This is because the sales of Japanese cars fell substantially during the high season from September to October (There is a Chinese phrase "Gold September and Sliver October") due to the slumping consumption caused by the slowdown of the economy and the effect of anti-Japan demonstrations over the territorial issue between Japan and China.

According to the press releases by each OEM announced by November 2012 and the original survey by MarkLines, amid the continuing adverse effect of anti-Japan demonstrations, eight Japanese OEMs including Toyota, Nissan, and Honda revised their 2012 sales target downward by 650,000 units. Yet, they have not changed their medium-term plan in which they will boost production capacity in China from the current level of around 4.2 million units a year to about 6 million units in 2015, and to a further 7.4 million units in 2017.

In the meantime, leveraging the rapid fall of Japanese car sales, Chinese cars (including some models based on foreign models under a Chinese brand) and European models have been increasing sales substantially.
When we look at the change of the monthly sales share in 2012 by major brands, the average share of Japanese cars dropped sharply from 19.5% between January and August to 10.3% between September and October, when anti-Japan demonstrations occurred (Appendix Table 3: Monthly sales share of passenger cars in 2011/2012 on a factory shipment/wholesale basis).
This 9.2 percentage points decline by Japanese cars in September-October are replaced by the 3.4 percentage points of Chinese cars, which is the largest, followed by the 2.6 percentage points of European models, and 1.6 percentage points each from Korean cars and US models.

According to the survey conducted for people involved in the automotive industry in October and November 2012 by Gasgoo, a China-based automotive research firm, many think that the improvement of Japan-China relations is an important factor for the recovery of demand for Japanese cars in China. If Japan-China relations do not worsen but improve, the adverse effect on Japanese car sales will remain as it is until March 2013 and sales are expected to improve thereafter.
According to the preliminary report on vehicle sales in China in November 2012, Toyota sold 63,800 units (down 22.1% year-on-year), Nissan 79,500 units (down 29.8%), Honda 41,200 units (down 29.2%), and Mazda 12,200 (down 29.7%); the rate of decline was shrunk compared to that in September and October.

(Note) In the data of this report, Japanese cars, US cars, European cars, and Korean cars are models marketed in China as foreign brands, and original brands of joint ventures in China (for example: Dongfeng Nissan Passenger Vehicle's Venucia brand). However, foreign models marketed under Chinese brand (for example: the Xenia under FAW brand) are classified as Chinese models.


Sales of Japanese cars in China: Due to the worsening Japan-China relations, sales fell substantially for two consecutive months from September 2012

Monthly sales of Japanese passenger cars: Sales fell rapidly by 39% and 58% in September and October, respectively

Concerning the 2012 passenger car sales in China (factory shipment/wholesale basis), the accumulated sales until October are 12.57 million units, up 6.7% year-on-year, but is below the forecast (9.7% growth for the full business year) at the beginning of the year. The main factor is sales in September and October remaining the same as those in September and October last year because of slumping consumption due to the slowdown of the economy and the effect of anti-Japan demonstrations over the territorial issue between Japan and China.

European, US, and Korean OEMs increase substantially their shares in September and October, 2012

In the meantime, decreased sales of Japanese cars were replaced by other OEMs, especially by Chinese and European cars. When we compare the average monthly sales share by each OEM before (in the January-August period of 2012) and after (in September and October) the anti-Japan demonstrations, the share of Chinese cars grew most by 3.4 percentage points from 38.8% to 42.2%. The share of European cars increased by 2.6 percentage points from 21.6% to 24.2% and that of US and Korean cars each grew by 1.6 percentage points to increase their shares.

Among them, VW models, which are European models, registered a record sales share in China at 19.7% in October 2012 since January 2011. (For further details, please refer to the following table "Appendix Table 3: Monthly sales share of passenger cars in 2011/2012")

Among them, European cars registered a high growth ranging from 20% to 47% except in September 2012 (up 13.6%) and June (up 19.7%). In October, when sales of Japanese cars declined substantially, the sales volume of European, US, and Korean cars grew significantly by 32.9%, 23.9%, and 25.6%, respectively. Sales of Chinese cars registered a record growth of 16% in October, which is the largest growth in 2012. (For further details, please refer to the following table "Table 2: Year-to-year change of sales volume of passenger cars (by foreign OEM) in 2012")


Sales ranking of passenger cars by model: In September and October, sales of Japanese cars fell substantially while sales of models such as Hyundai Elantra and Ford Focus grew 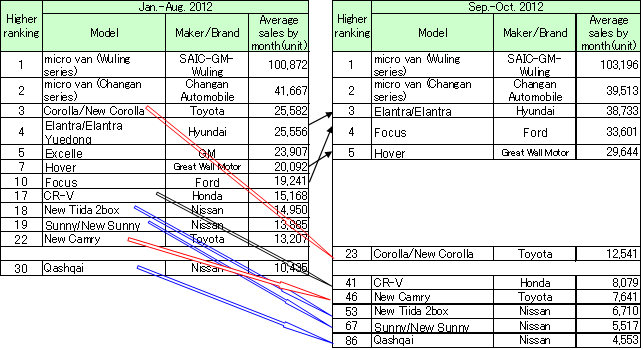 In the meantime, following the top two Chinese models, "Wuling series" and "Changan series" microvan, Hyundai's Elantra series climbed from 4th to 3rd while Ford Focus from 10th to 4th and VW's locally-developed sedan, the Lavida, from 12th to 6th.

According to each OEM's press releases by November 2012 and MarkLines' original survey, eight Japanese OEMs revised their sales target for this fiscal year downward by about 650,000 units.

When we summarize the latest sales/production plans that were reported by the media after the worsening of the territorial issue between Japan and China and that were announced by each OEM at the 2012 Guangzhou Motor Show held in November 2012, we found that the eight Japanese OEMs aim to recover their business in China in the future, maintaining their plan to boost production capacity from the current 4.2 million units by about 3.2 million units in the medium run to 7.4 million units.

To achieve this target, these OEMs are planning to enhance production capacity from the current 6 million units to 10.2 million units a year, up about 70%, by 2018.

Among them, VW will upgrade and expand its existing plants and will also build new plants in Yizheng/Ningbo (East China), Foshan (South China), and Xinjiang Uygur Autonomous Region (West China). In addition to reinforce its existing foundations, it will enhance its business in western part of China and will also expand into the South China, where Japanese-affiliated companies have a firm base, in order to increase sales across China, boosting production capacity from the existing 2.4 million units a year to 4 million units, up 70%, in 2018.

In addition to the expansion of its existing plants, GM will build its production capacity of 300,000 vehicles in Wuhan, where Nissan and Honda have a firm base, in 2014. Also, in order to focus on the expansion into the West-China region, it will start the construction of a branch factory of SAIC-GM-Wuling, which is a microvan joint venture, in Chongqing in 2013 with a plan to prepare a production capacity of 400,000 small cars (microvans and compact passenger cars under Baojun, of joint venture brand) in 2015. It will establish production facilities in eastern, western, southern, and northern China.

According to the survey (survey 1 below) for people involved in the automotive industry in China, which China-based automotive research firm, Gasgoo, a Chinese research company, conducted in October (5th to 14th) 2012, when massive anti-Japan demonstrations erupted across China, more than 50% think that the adverse effect on Japanese car sales will be eliminated within six months (29%) to within one year (28%).

In the meantime, nearly half (48%) of those surveyed think that the recovery of Japanese car sales in China depend on political factors including "Japan-China relations and the act of Japanese OEMs themselves in the future". 19% think that it will take three years for Japanese car sales to recover while 13% have an extreme view in which "it is basically impossible to recover".

According to a similar survey (survey 2 below), which Gasgoo conducted one month after the first survey (between November 19th to 25th) after massive anti-Japan demonstrations calmed down, half of those surveyed (50%) think that the slumping Japanese car sales bottomed out. About 60% (29% + 28% = 57%) think the recovery of Japanese car sales will begin soon: in December 2012 (29%) and in the first quarter of 2013 (28%).

Survey １. "(After worsening of Japan-China relations/anti-Japan demonstrations) Japanese cars in China in the future?"

Survey 2. "(After worsening of Japan-China relations and anti-Japan demonstrations) Japanese cars in China in the future?"

-- Survey implementing agency: Gasgoo
-- Survey period: November 19 to 25, 2012
-- Those surveyed: people involved in the automotive industry in China (numbers not made public)


Table 2: Year-to-year change of sales volume of passenger cars (by foreign OEM) in 2012