A "smart grid" (next-generation electric power transmission network) is a system to be built on a power transmission network capable of controlling the flow of electricity from both the supplier and demand sides for optimal efficiency. Several demonstration projects of such a system have been conducted in Japan since 2010 by groups that include such OEMs as Toyota, Nissan, Mazda and Mitsubishi Motors. Honda has started an independent demonstration project in Japan (Saitama Prefecture) and the state of California in the U.S.

This report, Smart Grid (1), describes the homes with electric storage capacities being developed by Toyota group, the role of an IT system called "Toyota Smart Center" that forms the core of Toyota's smart grid strategy, and homebuilders' supply plans of homes with electric storage capacities (assuming further market penetration of EVs and PHEVs). The upcoming report, Report (2), will cover Nissan's undertaking in the Yokohama Smart City Project, and plans being developed by Nissan and other companies about secondary use of lithium-ion batteries (reuse of the batteries removed permanently from EV or PHEV as household storage batteries, etc.).

Among the automakers reported, Toyota, Nissan and Mitsubishi also plan to study the use of driving batteries for EV and PHEV as household storage batteries through a series of proving tests. Using EV and PHEV batteries as an emergency power source during a power outage is drawing new attention especially after the great earthquake that devastated Eastern Japan.

In October 2010, Toyota announced the company had developed the Toyota Smart Center, Toyota's unique IT system that enables integrated control of consumption of electric power supplied by homes, automobiles and electric power companies, as a part of its smart grid initiatives. The system is aimed at efficient use of electricity in a broader range of locations including homes equipped with HEMS (Home Energy Management System) and EVs and PHEVs.

Services based on this system will be available on certain EV and PHEV reaching the market in early 2012, and on certain homes built by Toyota Home.

According to Toyota, the Smart Center forms the core of Toyota's smart grid strategy and as such, it will further increase Toyota's strength as a manufacturer of both automobiles and homes, and help Toyota propose optimal use of energy.

In March 2011, Toyota announced it has defined "smart community service" that links automobiles, homes and information as a new added value on automobiles and that the company plans to promote global deployment of "Toyota Smart Center" that offers integrated control of such services. Toyota expects steady market penetration of the smart center especially after the EV and PHEV launch in 2012. 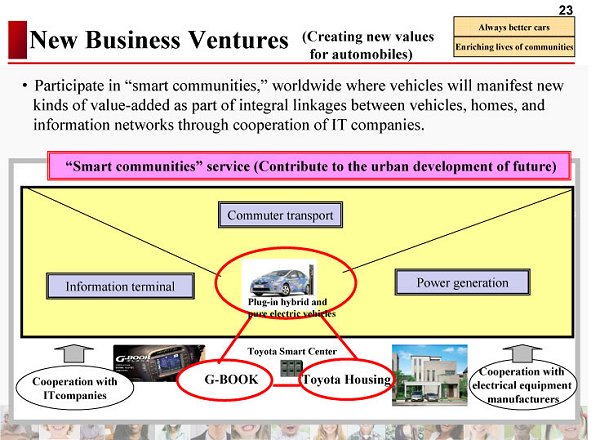 Toyota is set to combine the expertise of Toyota Home, the nine group companies that invested in Toyota Home, and Misawa Homes toward the commercialization of homes equipped with solar and other natural energies, storage systems and Toyota smart center. In April 2009 Toyota and Toyota Home announced that they would jointly develop HEMS having storage capacities and that the system would be available for commercial application in 2011.

In April 2010, the Japanese Ministry of Economy, Trade and Industry chose four areas for next-generation energy and social system demonstration; Yokohama City, Toyota City, Keihanna Gakken Toshi of Kyoto Prefecture and Kitakyushu City. A total of twenty cities had indicated interest in hosting the demonstration project. The four areas are making master plans according to their proposals that were presented to the Ministry.

In April 2010, after the City of Toyota was chosen one of the four next-generation energy and social system demonstration areas, the City of Toyota, Toyota and 19 other companies took on initiatives of the demonstration project. The project is aimed at reducing CO2 emissions by 20% on average in homes in the project area (over 70% in HEMS-equipped smart houses) and 40% in the transportation segment.

The project will also verify if the batteries aboard the EV and PHEV can be used to supply electricity to homes, or to charge commercial and public facilities after disasters.

The project uses the world's first large-scale wind power stations with storage batteries that are already in operation, to construct a closed grid that supplies electricity generated by wind and solar energies, independent from the transmission lines of the local electric power company.

Toyota is operating the "Toyota Smart Center" on an experimental basis with eight Prius PHEV and two HEMS-based Toyota homes that the company has provided for the project and seeking further evolution of the system through the demonstration project in Rokkasho Village.

Homebuilders and appliance manufacturers are eager about developing homes with solar power generation, storage and HEMS capacities and their proving tests as they see the growing popularity of EVs and PHEVs.

For example, Daiwa House Industry has developed D-HEMS, a HEMS system that uses lithium-ion batteries made by Eliiy Power Company and allows the user to decide whether the stored electricity is to be used at home or sold to the electric power company. Panasonic has developed a system that combined consumer-use 18650 type cylindrical lithium-ion batteries. Itochu Property Development has released for sale condominiums that have solar panels and EnerDel-made lithium-ion storage batteries installed in the building's community areas. Osaka Gas Company, jointly with Sekisui House, has developed houses that are powered by three types of batteries (fuel cells, solar cells, lithium-ion cells). The company has started testing the houses with people actually living in them. The company will also demonstrate using batteries for EV as storage batteries for home use.

Panasonic: Storage systems for home use with 18650-type batteries