The VW's emissions scandal is casting dark clouds over the future of diesel engines. The nitrogen oxides  (NOx) problem, i.e., the problem known as off-cycle NOx emissions, which was smoldering in Europe, home of diesel engines, has caught fire in the United States.

In general, NOx measurements taken during emissions testing using pre-defined test conditions can vary in real-world conditions depending on driving conditions and driver skills. This off-cycle problem reportedly surfaced in emissions from diesel vehicles when Euro 6 (Europe's latest emissions standards) was introduced in Europe in 2014. But it came as a shock to the world when it was discovered that the deviations in NOx measurements in VW vehicles resulted not from variable testing conditions alone but from deception by VW, one of the prominent OEMs in the world vying for the number one spot.

The NOx emissions levels of VW vehicles powered by 2.0-liter diesel engines，which were measured during on-road tests by the International Council for Clean Transportation (ICCT) and West Virginia University (WVU) in the United States, were unusually high. They were so high, in fact, that they couldn't be explained simply as an off-cycle problem. The tests revealed that the deviation resulted from the use of a "defeat device."

This report focuses on what has been disclosed and how and why it happened.

The hazardous substances in emissions from automobiles have been regulated worldwide after the Clean Air Act (CAA, aka Muskie Act) was revised in the 1970s. The strictest emissions standards are in the United States, imposed by the U.S. federal government in 49 states and by the State of California in California. The federal standards are set by the U.S. Environmental Protection Agency (EPA) and the state standards in California by the California Air Resources Board (CARB). The EPA and CARB are in charge of approving and certifying emissions of each vehicle built by OEMs. These emissions standards must be met over the full useful life of the vehicle (120,000 miles or 190,000 km). To ensure that vehicles are compliant, the EPA and CARB regularly check emissions performance of vehicles that are on the market.

Eight of the VW models, all supposedly in compliance with the Tier2-Bin5 federal standards, i.e., compliant in all 50 states, were found to be in violation of the CAA Section 203(a)(3)(b) that prohibits the use of "defeat devices." A defeat device is an apparatus or program that is designed to disable the emissions control systems when the vehicle is in an emissions test mode but deactivate it when the vehicle is running on roads. The sole purpose of using such a device is to create a trade-off between the vehicle's emissions performance and both its fuel economy and dynamic performance. The device is designed to increase the vehicle's commercial value in on-road or non-test conditions.

The use of defeat devices was explicitly prohibited by law in the United States in 1990, and forbidden by EC directives in Europe in 2001. Automakers applying for new vehicle certification that may contain the risk of violating the law are required to declare their emissions control systems in advance and have them approved before they can be used in their vehicles. This September, it was found that VW had "intentionally installed a 'defeat device' in its emissions control system." The VW vehicles found to be in violation include the Jetta that passed Tier2-Bin5 standards and was named the Green Car of the Year in 2008. This sparked a massive uproar, as the Jetta was one of the leaders in clean diesel technology then.

The VW vehicles equipped with the 2.0-liter EA189 and EA288 engines in question number 482,000 units in the United States. According to the CARB, VW's emissions control systems continue from GEN1 to GEN2 to GEN3, starting from the 2009 model year. The EA189 engine was replaced by the EA288 whose emission system is GEN3, in order to achieve a significant increase in power output and fuel economy. The GEN3 was certified for the 2015 model year and the cars were offered for sale. But the 2016 model vehicles have not been offered for sale in the United States, as they became subject to investigation after the defeat device issue surfaced.

The EA189 engine is VW's first clean diesel engine that met the Tier2-Bin5 U.S. federal emissions standards and is used globally. Reportedly, 11 million VW vehicles worldwide are in violation, since they are equipped with defeat devices. As a means to respond to the recall campaign, VW reportedly will allocate EUR 6.5 billion in the third quarter of 2015 as reserves, and then set aside EUR 1 billion each year through 2019 to deal with the issue. However, the plan is filled with uncertainty.

* Passed Tier2-Bin5 emissions standard and was named Green Car of the Year in 2008 in the United States. (Prepared by MarkLines based on EPA publication)

(Prepared by MarkLines based on media reports from various countries around the world as of October 8, 2015) 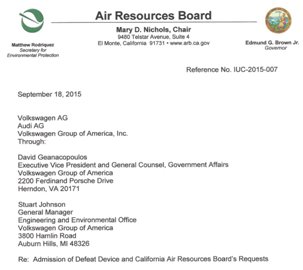 On September 18, 2015, the EPA announced that it had issued a Notice of Violation (NOV) to VW.

The CARB also issued a similar notice to VW on the same day requesting VW to take appropriate actions with the vehicles on which "defeat devices" were installed.

According to the CARB, the issue started when the results of on-road emissions testing of VW diesel vehicles, which were conducted and finalized in May 2014 by the ICCT and the WVU in the United States, were released. Upon completing the on-road testing, the WVU raised questions about NOx emissions levels that were unexplainably higher than the standard. The WVU presented the results to the CARB and EPA.

The CARB and EPA checked the test results closely with VW for several months. In December 2014, VW agreed to a voluntary recall of the subject vehicles in order to fix the GEN1 and GEN2 control software used in the emissions control systems in the 2.0-liter diesel engines on the Jetta, Golf, Passat, etc. A total of 500,000 units (including 50,000 in the state of California) were subject to the recall.

At that time, the CARB cautioned VW that the automaker would need to conduct another recall if the CARB's confirmatory test results were still high. The confirmatory testing was conducted in May 2015, but the test results were still remained high. The recall calibration did reduce emissions in real-world driving conditions, but NOx emissions still remained just as high as they were before. In July, the CARB shared the test results with VW. The CARB also shared its test results with the EPA. Several technical meetings were held with VW. On September 3, 2015, VW officially admitted that the test vehicles were manufactured with a special program called a "defeat device" that circumvented the vehicles' GEN1, GEN2 and GEN3 emissions control systems only when the vehicle was being tested. The defeat device had not been declared in the certifications that VW submitted to the EPA and CARB.

On September 18, 2015, the CARB determined that the voluntary recall that VW conducted in December 2014 was deemed ineffective and unapproved. The CARB further requested VW to immediately take appropriate corrective actions. At the same time, the CARB notified VW that it had initiated an enforcement investigation of VW regarding all the  2009 models through 2015 models equipped with 2.0-liter diesel engines. The CARB expressed that it expected VW's full cooperation in this investigation.

On October 8, 2015 (EST, U.S.), the president and CEO of VW Group of America testified before the House of Representative's Committee in which he admitted VW's fault and offered an apology.

According to the WVU final report, on-road emissions measurement testing was conducted with three diesel vehicles and certain unexplainable results were found:

* Real-world NOx emissions exceeded regulatory limits by a factor of 15 to 35.

* NOx level was lower for high-speed highway driving with flat terrain conditions but higher for rural up/downhill driving. The NOx emissions level was higher on vehicles equipped with a Lean NOx Trap (LNT) system than on those fitted with a urea-based Selective Catalytic Reduction (SCR) system.

Test vehicles and their engine specifications

(Created by MarkLines based on WVU final report) 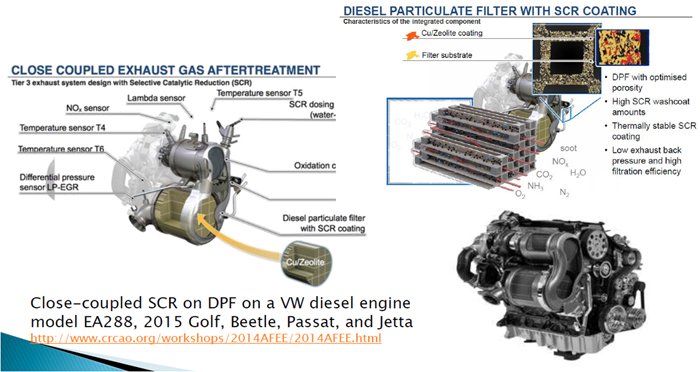 The vehicle speeds, acceleration/deceleration patterns, etc., in WVU's driving test are not the same as those of the certification cycles, although the speed ranges fall within the same zones. 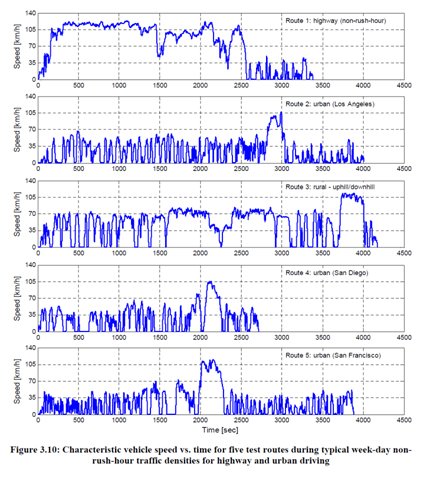 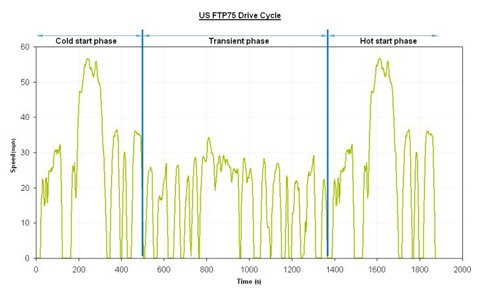 The levels of off-cycle NOx emissions cannot be compared directly with the levels of the standard limit because the testing patterns are different. It must be noted, however, that the test measurements are far higher than the Tier2-Bin5 standard identified by green lines. The NOx measurements seem to increase as Route number changes from 1 to 4. Vehicle B, equipped with an aqueous urea-based SCR, had fewer deviations from the standards than did Vehicle A equipped with an LNT. Vehicle C too features an aqueous urea-based SCR technology. 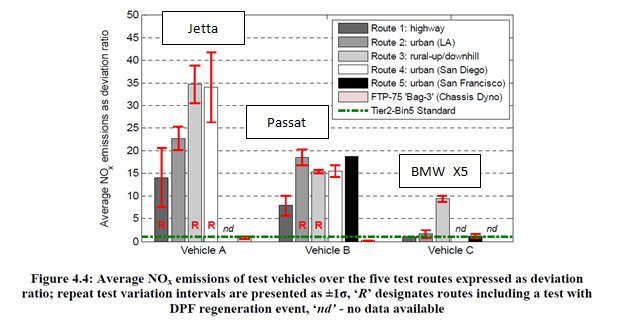 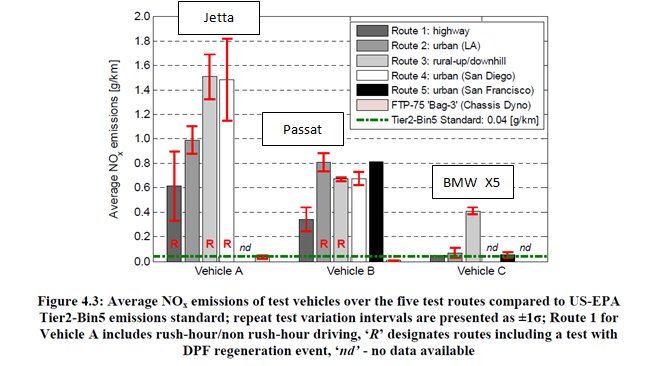 Diesel engines are known for being superior in terms of their thermal efficiency and low fuel consumption. In recent years, they have conquered technical issues such as noise, soot, particulate matter and NOx emissions. Referred to as "clean diesel", "greentech", or other names depending on the OEM, diesel engines have become one of the main contributors to reducing CO2 emissions, because of their inherent advantages. Diesel vehicles account for more than half of the total passenger cars on the road in Europe, home of diesel vehicles. Mazda has been launching clean and fuel-efficient diesel vehicles under the series name of Skyactiv-D.

Emissions from diesel vehicles have become cleaner in line with technological advancements being made in high-pressure fuel injection, common-rail, after-treatment devices, and other technologies. But the market demands that further improvements be achieved in fuel economy, with the OEMs constantly competing against each other with their state-of-the-art diesel and hybrid technologies. It appears diesel will continue to be important in meeting the EU's CO2 fleet average target of 95g/km in 2021.

Compared to gasoline engines, one of the major drawbacks of diesel engines is controlling gas emissions, which is rather difficult because controlling gas emissions requires a complex after-treatment apparatus. Diesel is prone to forming soot, which when accumulated in the DPF, must be burnt off (filter regeneration). Gasoline engines have a three-way catalyst which is capable of removing NOx through lambda 1.0（theoretical air-fuel ratio)operations, whereas diesel engines operate in a leaner air-fuel ratio in which three-way catalysts cannot properly work, emitting a lot of NOx.)

They require an LNT, aqueous urea-based SCR, or other bulky after-treatment systems to adsorb NOx emissions. Mercedes Benz, BMW and other automakers that sell diesel vehicles in North America use similar technology.

In the U.S., the regulatory limits for exhaust-gas emissions are the same for both gasoline and diesel vehicles, so diesel vehicles face tighter emission regulations in the U.S. compared to Japan. The US-EPA emissions standards apply in 49 states while and the CARB standards apply only in California, and the standards are not the same. Therefore, OEMs must develop vehicle specifications that meet the standards for all 50 states, but this means that they always have to develop vehicles that can pass the stricter of the two standards, i.e., that of the EPA or that of the CARB. The VW vehicles in question were supposedly designed to meet both EPA and CARB standards and be compliant in all 50 states, and VW was supposed to discuss this with the EPA and CARB.

The following are the regulatory limits in the United States:

Bin: Regulatory emission limits (Bin 1 being the strictest) that automakers can choose from at their own discretion (Source: MarkLines)

In the second report in this series, we will outline the state of diesel vehicles in the North American market; compare regulatory emissions limits in the U.S., Europe and Japan; and report on the issue of off-cycle discrepancies.