The sixth EV & HEV Drive System Technology Expo (EV Japan 2015) was held at the Tokyo Big Site in January 2015 as part of the Automotive World 2015. This report summarizes exhibitions at the Expo.

Meidensha exhibited an improved drive unit that integrates a motor and gears as well as a module that integrates a motor and an inverter. Shindengen Electric Manufacturing showcased a direct current to direct current (DC-DC) converter and an in-vehicle battery charger, , which the company supplies to Honda. Nichicon exhibited a downsized charger-integrated DC-DC converter, which the company supplies to Mitsubishi i-MiEV. Sinfonia Technology and Sumitomo Shoji Machinex each displayed a motor for ultra-compact electric vehicles (EVs).

Nippon Chemi-Con exhibited an electric double-layer capacitor/module, which is supplied to Mazda and Honda, for the second straight year. The company also displayed next-generation capacitors.

Nidec and Yaskawa Electric, which exhibited their products until last year, presented no products at the Expo this year. The Automotive Weight Reduction Expo and other Expos held in conjunction with the Automotive World 2015 will be featured in the upcoming reports.


Technologies for HVs and EVs: Meidensha, Shindengen and Nichicon

Integrated unit for motor and gears 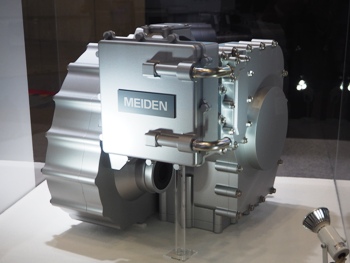 Integrated module for motor and inverter


Technologies for ultra-compact EVs: Sinfonia, Sumitomo Shoji Machinex and others 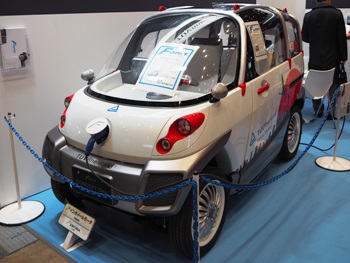 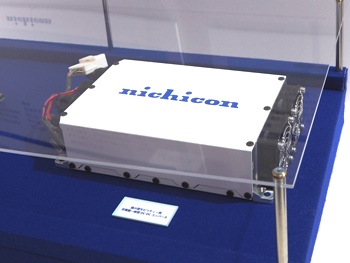