The latest developments at Mitsubishi Motors Corporation are reported in two parts (Parts 1 and 2).  This first report focuses on the steps in Mitsubishi's new mid-term business plan titled "New Stage 2016,"for the three fiscal years from April 2014 through March 2017.

Pickup trucks, sports utility vehicles (SUVs) and crossovers are Mitsubishi's strategic models. The company intends to increase the ratio of these vehicles to total sales volume from 57% in the fiscal year ended in March 2014 (FY 2013) to 63% in FY 2016. Mitsubishi also plans to increase the number of "plug-in hybrid EVs (PHEVs)" to three. This is part of the company's plan to increase the production ratio of electrified vehicles to its total quantity to 20% by 2020.

In its regional strategies (1) the ASEAN region will remain Mitsubishi's primary source of profit, (2) the recovering business in Europe will be strengthened as the second pillar, and (3) continued efforts will be made to gain a firm profit in Japan and North America. Mitsubishi's business in Europe is recovering quickly in terms of net sales and operating income. The recovery is due largely to the Outlander PHEV that was launched in the FY 2013.

Mitsubishi is cooperating with several automakers in pursuit of "effective use of Resources through Partnerships to expand Business Opportunity." In June 2011, Mitsubishi and Nissan established a joint-venture, NMKV Co., Ltd., concentrating on mini vehicle business. The joint venture was expanded in 2013 with the participation of Renault. NMKV will play a central role in developing all-new mini vehicle-based global entry models and electric vehicles (EVs).

Part 2 of the report, which is coming shortly, will focus on Mitsubishi's consolidated financial results, sales and profitability by region, and the capital restructuring plan that was executed in the early part of 2014 along with the resumption of dividend payment.

Other than strengthening the SUV lineup as outlined above, Mitsubishi has announced plans to increase the production ratio of electrified vehicles from around 2% in the FY 2013 to 5% in the F 2014 and to 20% in the FY 2020.  The plans include increasing the number of available PHEV models from just one (Outlander PHEV) to three.  Mitsubishi has lowered the price of the high-grade version of the i-MiEV (battery capacity 16.0kWh) by JPY 900,000, and the entry-grade version (battery capacity 10.5kWh) by JPY 190,000.

In May 2014, Mitsubishi and three other automakers, Toyota, Nissan and Honda, embarked on a joint project aimed at promoting the installation of charging infrastructure for electrified vehicles. Their goal is to increase the number of chargers from approximately 5,000 as of March 2014 to 17,000 in Japan within 2014. 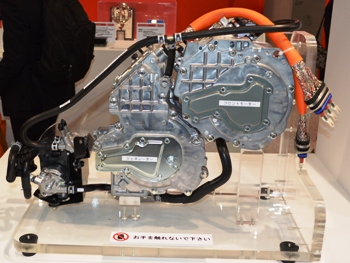 Mitsubishi has experienced loss-making operations in Europe for three years in a row since FY 2010. In 2012, the company sold car plant in the Netherlands to lessen its financial burdens. As a result, and with the recovery of economy in Europe in general, Mitsubishi's business turned to profitability in FY 2013. Thanks to the steady sales of the Outlander PHEV that was launched in FY 2013, the company intends to boost its sales in Europe from 10,000 units in FY 2013 to 30,000 units in FY 2014.

In April to June 2014 the net sales increased 1.7-folds to JPY 147.5 billion and operating income increased 2.7-folds to JPY 12.6 billion. The operating income in Europe exceeded that in Asia (JPY 11 billion) and Europe became Mitsubishi's largest source of profit (see Note). Mitsubishi hopes to strengthen the recovering business in Europe as its second source of profit. According to Mitsubishi, the Outlander PHEV is a significantly profitable model in its lineup.

(Note) This refers to the net sales and operating income classified by the geographic location of the customers. Please see Part 2 of the report on Mitsubishi to be posted shortly.

Mitsubishi is experiencing sluggish sales and deficits in its business in North America. However, Mitsubishi will not withdraw from the promising market in the United States.

In 2011 to 2012, Mitsubishi discontinued production of the Galant and two other U.S.-built models at the Illinois plant. In mid-2012, the plant started production of the Outlander Sport that can be exported outside of North America with plans to increase the plant's working ratio. Mitsubishi saw upswing in its sales in North America in FY 2013 due largely to the strong sales of the all-new Outlander and the Mirage that were launched (imported from Thailand) in July 2013. As a result, Mitsubishi's deficit in North American business was reduced to JPY 3.8 billion. Its sales from April to June 2014 increased sharply by 37% year-over-year at 19,832 units. Mitsubishi aims to recover to a break-even level in North America.

(Note) The Outlander Sport (known as the RVR in Japan) shares the wheelbase with the Outlander but is a five-seat compact SUV about 36cm shorter in overall length. The Outlander (seven-seater) is imported from Japan.

Mitsubishi plans to launch Renault's D-segment passenger cars and the Outlander PHEV in 2015 to turn around its business in North America. The company is also eyeing selling the Mirage-based small-size Attrage sedan in the United States.

Mitsubishi announced that it would supply the Attrage to Chrysler in Mexico for five years starting in November 2014. Mitsubishi will sell the Mirage under its own brand.


Improving efficiency of production and distribution at Nagoya and Mizushima plants

In Japan, Mitsubishi's Okazaki plant in Nagoya had become old after over 30 years of operation. Mitsubishi will modernize the plant and increase production of the Outlander PHEV. The renovation will be conducted in three phases. When the third phase is completed in January 2015, the production costs (manufacturing and in-house distribution costs) will be reduced by 30%.

Similar production and distribution efficiency improvement was conducted at about the same time at the Mizushima plant where minicars are produced.


Cooperation with Nissan and other automakers

Mitsubishi's new mid-term business plan calls for "effective use of resources through business partnerships" aimed at structural reform and stable business foundation.  In June 2011, Mitsubishi and Nissan formed a mini vehicle manufacturing joint-venture, NMKV. Their partnership was expanded with the participation of Renault.  NMKV will develop global entry cars and all-new electric vehicles based on its mini vehicles. Renault will supply D-segment passenger cars  to Mitsubishi. The D-segment passenger car will substitute for the Galant whose production in the United States ended. Mitsubishi is also interested in receiving C-segment passenger cars that will succeed to the Lancer from Renault. According to Mitsubishi, however, rebadging Renault's vehicles is not the best idea as the company wants to produce them in Russia and China as well.

Collaboration with other automakers