The IAA 65 Frankfurt Auto Show 2013 was held at Messe Frankfurt from September 10 to 22. This is the second of the three-part MarkLines reports covering the highlights of the show. The report covers the new models and concepts of major automakers. European automakers introduced in this report are: PSA, Renault, Fiat, Jaguar/Land Rover, and Volvo Cars. As for the Asian OEMs, Hyundai and Changan Automobile are reported. Japanese and American companies will be reported in the third and last report.

PSA will introduce EMP2 to its models starting in 2013. This will allow the company to share its components across different models and to reduce its production costs. Two models built on this EMP2, the new Peugeot 308 and Citroen Grand C4 Picasso, made their debuts at the Auto Show. PSA also exhibited a next-generation hybrid system called "the Hybrid Air" which combines an air-pressure-driven motor and an engine. The newly introduced concept model from Citroen, the Cactus, incorporates this system in  powertrain. 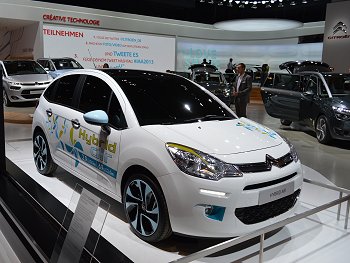 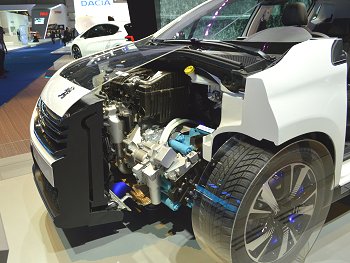 Renault unveiled a next-generation MPV design concept, the Initiale Paris, to indicate is future design directions. It displayed five other concept models including the ones already premiered. The company also displayed a major remodeled version of the best-selling SUV model, the Duster, under the Dacia brand.

Other concepts displayed at the Renault booth

Taking full advantage of the small car 500 brands, Fiat now places the 500 family as one of its brand and plans to introduce derivative models under this brand. Fiat displayed and highlighted the 500 family models: the four-door five-seater 500L, the seven-seater 500L Living, Trekking 500L SUV and the 500e EV. Alfa Romeo presented the chassis of a light-weight sports car, the C4.

The Hyundai group displayed Hyundai and Kia brand models. Hyundai brand uncovered the new i10 in A segment, as well as a fuel cell electric vehicle (FCV), the ix35 Fuel Cell. The Kia brand unveiled a crossover HV concept, the Niro, and a European version of the  Soul SUV both in B segment.

Changan Automobile has been the only Chinese manufacturer at the Show since 2011. This year, the automaker prepared a larger booth mainly displaying its new SUVs.