Yaskawa develops a motor that does not use rare earth metals; Magna showcases a micro-hybrid system

The fourth EV & HEV Drive System Technology Expo was held at the Tokyo Big Site on January 16 to 18, 2013. The following summarizes the exhibitions.

Yaskawa (Yaskawa Electric Corporation) exhibited a lineup of its motor drive system, QMET-II, and also presented an explanation panel on a motor that does not use an expensive neodymium magnet, one of rare earths, attracting attention of the visitors. Concerning motors, Meidensha Corporation, which supplies a motor/inverter for Mitsubishi Outlander PHEV, showcased a drive unit for EVs, which integrates a motor and a gearbox, while HYOSUNG Corporation, which supplies a drive motor to Hyundai Motor/Kia Motors, also exhibited its products.

Incidentally, actual PHVs/EV s were showcased including the Mitsubishi Outlander PHEV and the Citroen DS3 Eｌectrum, a converted EV that was jointly developed between SIM-Drive, a Japanese EV venture company, and PSA..


Yaskawa has developed motor that does not use rare earths

Yaskawa develops EV motor, which does not use neodymium magnet

Meidensha exhibits a drive unit for EVs, which is currently being developed 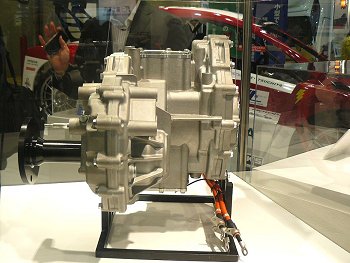 Meidensha's drive unit for EVs, which integrates a motor and a gearbox

Specifications of a motor/inverter currently being developed (reference value)

HYOSUNG's lineup of motors for EVs