*An updated version of this forecast report will be released every quarter. 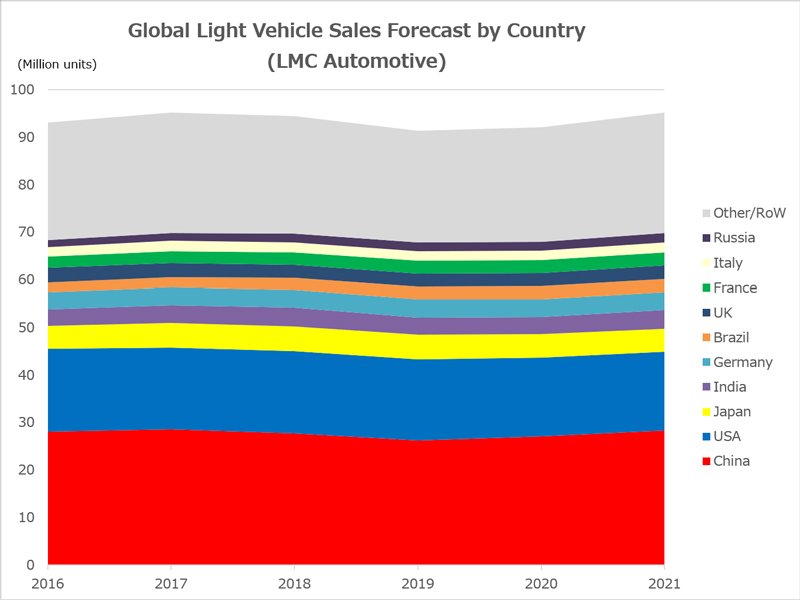 China
The disruption created by the early implementation of State VI emissions standards in some regions lasted longer and had a more pronounced impact on wholesales and production than expected. In addition, the latest incentive policy announced in June is unlikely to be strong enough to stimulate a meaningful sales rebound in Q4. In light of these factors, we decided to revise our full‐year 2019 PV sales forecast down to ‐5.5% from 2018.

USA
A major risk to the forecast arises from the US government’s threat of imposing tariffs on imported vehicles, which would not only make them more expensive, but also hurt consumer confidence. A deal has been reached with Japan, but European models remain at risk. In August, President Trumped joked that his administration was working “on a 25% tariff on all Mercedes‐Benz and BMWs coming into our nation.” Tariffs on European models would have the greatest impact on the Premium segment. Last year, imports grew by 1.2%, almost three times faster than the total industry, but are likely to fall by 4% this year as Toyota localizes the RAV4 Compact SUV, the bestselling non‐Pickup vehicle in the country. As other high‐volume SUVs, such as the Small Hyundai Tucson, are fully localized in North America, we expect imports to fall from 22% of the market this year to 19% in the late 2020s.

Japan
For 2019 as a whole, we forecast a 1.2% increase in Light Vehicle sales to 5.26 mn units, based on moderate prebuying in the lead‐up to the consumption tax hike. From 2020, however, sales will begin to taper off.

India
We expect sales to improve over the remaining months of 2019 and into Q1 2020 as consumers will try to take advantage of heavy discounts on BS‐IV vehicles. The extent of this growth, however, will be smaller than previously anticipated. Sales are seen to decline sharply in Q2 2020, due to the implementation of the BS‐VI emissions standards (and thus higher vehicle prices), but are likely to start recovering gradually in H2 2020.

Germany
The selling rates throughout the first eight months of the year have been quite extraordinary, given that at the start of the year, the German Light Vehicle market seemed to be approaching something of a plateau. In fact, PV sales have spiked in 2019, with the selling rate averaging over 3.7 mn units/year, hitting 3.8 mn units/year in January, February and July, and 4.3 mn units/year in August. Even if, as expected, the selling rate slows to a more sustainable rate in the remainder of 2019, PV sales will still comfortably beat last year’s 3.44 mn units.

Brazil
Against a backdrop of lackluster economic growth, the Brazilian Light Vehicle market has remained on the recovery path. Sales grew every month in 2019, except for March and August. However, the negative numbers were a consequence of the calendar, and not of a weakening market. Nevertheless, as expected, the growth rate has slowed down. In January‐August this year, average monthly expansion was 9.5%, down from 15.0% last year. We forecast sales to total 2.62 mn units this year, which would represent a 6% increase from 2018.

UK
Due to the more hard‐line approach to Brexit negotiations being taken by new Prime Minister Boris Johnson – seen as increasing the risk of a no‐deal Brexit – the pound has fallen further against the US dollar in recent weeks, restricting the discounts that carmakers can offer to buyers. In the eight months to August, PV sales fell by 3.4% YoY. Even with some boost from a low base effect in the final four months of the year (due to last year’s WLTP implementation), we now believe that PV sales will fall short of 2018’s 2.37 mn units.

France
The French Light Vehicle market has, for the most part, remained stable in recent months, despite volatility in other European markets and political uncertainty. The Light Vehicle selling rate hovered around 2.6 mn or 2.7 mn units/year throughout January to July, before a spike to 3.1 mn units/year in August, which was possibly a result of a pull‐forward in sales ahead of a tightening of the rules around a scrappage scheme. Looking at the PV market, sales fell by 3% year‐on‐year (YoY) in the year to August, but this can be considered a relatively robust performance, given that sales are still close to historical highs. We continue to expect YoY comparisons to turn positive in the final four months of the year, as the same period in 2018 saw lower sales, due to the disruption caused by WLTP. That said, the impact of WLTP in France was not as severe as in some other European markets, and we therefore believe that PV sales for 2019 as a whole will show only very modest growth in YoY terms.

Italy
Against the backdrop of an economy teetering on the brink of recession, and amid political uncertainty, it is no surprise that Light Vehicle sales have been weak in 2019 to date. For the first eight months of the year, PV sales decreased by 3% in YoY terms, although the impact on the overall Light Vehicle market has been mitigated by growth of 7.8% in LCV sales. Overall, the Light Vehicle market is down by 2.2% in the year to date. The PV selling rate has averaged a little over 1.9 mn units/year throughout the January‐August period, roughly in line with our full‐year expectations. Even allowing for a boost to the YoY comparison from September to December – this period being affected by WLTP disruption in 2018 – PV sales are expected to be around 2% lower YoY in 2019 as a whole.

Russia
There has been a steady deterioration in the outlook for the Russian economy over the past quarter, and most indicators for the consumer look less encouraging than they did three months ago, which is bad news for the Light Vehicle market. The performance in the year so far has been disappointing, such that the best likely outcome for the market this year is a flat result, although downside risks are mounting. We have cut our 2019 forecast to just 1.80 mn units (+0.1%), which assumes a slight pickup in the coming months, thanks to government support. The outlook for GDP growth has deteriorated since our last report – GDP is now forecast to increase by just 1% this year – and some of the headwinds facing the consumer have intensified. Real incomes are still falling and the appreciation of the rouble seen from June onwards was wiped out during August, following the latest round of US sanctions. One positive is that the central bank cut rates again in September, bringing the key rate down to 7%. For 2020, the outlook remains deeply uncertain and although oil prices have rallied recently, due to the Iranian situation, a deteriorating global backdrop increases the risk of falling oil prices, something that would not fail to impact Russia. Although the country is much better insulated than it was, meaning that it should be able to avoid the kind of crises it has faced in the past, it is difficult to see how 2020 could be significantly better than 2019 in the present environment, particularly as government incentives are not expected to be more generous than they have been this year. We now forecast sales growth of 3.8% in 2020, assisted by some incentives, lower interest rates and delayed replacement demand. The risks to this outlook, however, are shifting resolutely to the downside.