Nissan's New Midterm Plan: aims for a global market share of 8% and operating profit of 8% in FY2016

On June 27, 2011, Nissan announced "Nissan Power 88" a six-year medium-term plan covering FY2011 through FY2016 in which Nissan is determined to achieve a global market share of 8% and a corporate operating profit of 8% in fiscal 2016. If these goals are met, Nissan's global vehicle sales will increase by three million vehicles in six years to over 7.2 million units.

Nissan disclosed how it will go about increasing sales quantities efficiently by making company-wide efforts in a bid to gain market share, sales quantities and operating profit at the same time.

According to the plan, the increase in sales will come mainly from emerging countries including BRICs and the five ASEAN member countries. Nissan will acquire AvtoVAZ, an auto leader in Russia, jointly with Renault and will build a plant in Brazil with an annual capacity of 200,000 units. Nissan will increase production capacity in China toward a market share of 10%. Nissan will also increase production in North America including Mexico to the 1.7 million-unit mark as it sees room for further recovery of the U.S. market.

Nissan will increase sales of the highly efficient V-platform models to more than 1 million units and also introduce price-entry segment in those markets. Nissan has constructed strategic partnerships with AvtoVAZ in Russia, Ashok-Leyland in India, and Daimler and others in advanced countries. According to Nissan, these partnerships are supportive of Nissan's competitiveness.

Nissan will launch a total of 51 new models during the six years. At the same time, Nissan will eliminate 13 existing models so that Nissan will have 66 models in fiscal 2016, only 2 more than what the company had in fiscal 2010. This follows the company's policy to improve sales efficiency by increasing the sales quantity per body type from 55,000 units in fiscal 2007 to 150,000 units.

Nissan will split the Kyushu Plant to suppress labor costs and increase procurement of parts from Asian suppliers. As a result, over 50% of Nissan's domestic production will be centralized in Kyushu to maintain domestic production of one million vehicles. 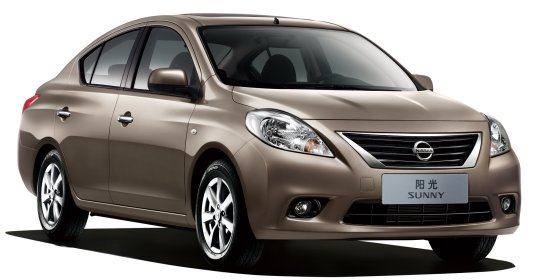 Sunny Sedan launched in China in January 2011
(the second model in the V-platform based family; marketed in 170 countries in the world
including North America where the car was introduced as the Versa Sedan)

Source: Nissan New Midterm Plan (2011.6.27)
(Note) The 13 models are to be eliminated in fiscal 2011-2016 by consolidating product overlaps, etc. For example, the next Quest and the next Elgrand will be consolidated into one model (both are sharing the D-platform since 2010) as will be Altima and Teana.

Nissan is not going to launch its world strategic cars across the board in the price-entry segment market, but will enter local markets in cooperation with local partners. In China, for instance, it will launch price-entry vehicles carrying the joint venture's original brand. In addition, the new models slated for launch during the midterm business plan period, such as the new Tiida launched in China in the first half of 2011, and the new Altima/Teana and the new QASHQAI slated for later launch, will support Nissan's global growth.

The V-platform derives its title from a "versatile" platform. Production of March/Micra HB began in 2010 as the first of the V-platform family. A second model, a sedan, will be produced and sold as "Sunny" in China and "Versa" in North America. The car is defined as a "global sedan" and will be sold in 170 countries.

Nissan will add another model to this family, to a total of three, by fiscal 2016 and plans to sell one million units a year of the V-platform-based vehicles.

(U.S.) Summer 2011  The new Versa sedan was exhibited at New York International Auto Show in April 2011. The car is slated for market launch this summer. Its major selling appeal is the legroom in the rear seat that is larger than most middle-sized cars. Powered by a 1600cc engine and the CVT, the car has EPA fuel efficiencies of 30 mpg city/37 mpg highway/33 mpg combined and the starting price is set low at US$10,990. It is produced at Aguascalientes Plant in Mexico for North and South American markets.

Source: Nissan New Midterm Plan (2011.6.27), press releases 2010.12.20/2011.4.19 (Note) The next model of the Note is likely to be based on the V-platform instead of the conventional B-platform and Nissan will appeal its fuel efficiency. The production site will reportedly shift from Oppama Plant to Kyushu Plant (production at the U.K. plant will continue for European markets). The Note sold 66,000 units in Japan in 2010, only next to the Serena (sold 75,000 units).

Nissan has (1) Brand power, (2) Sales power and four other strategies to help achieve the goals contained in its new midterm plan "Nissan Power 88."

(4) Zero-emission leadership is the strategy aimed at selling a total of 1.5 million EVs, including Renault products, in six years through fiscal 2016.

(6) Cost leadership is the strategy aimed at continuing an annual 5% reduction of its total costs including logistics.

(5) Details of plans by the region under the business expansion strategy are reported under "Key markets of the world" heading below.

Six strategies to achieve goals in the new midterm plan

On the prediction that the emerging markets will account for 60% of global demand in fiscal 2016, Nissan plans to strengthen its markets in China, Brazil, Russia, India and ASEAN countries. The company is eyeing a 10% share in China and will build a new plant in Brazil with an annual capacity of 200,000 vehicles. Nissan, jointly with Renault, will acquire control rights in AvtoVAZ, the leading automaker in Russia, and increase their combined share in Russia to 40%.

Nissan's move is not limited to the emerging markets. On the ground that there still is room for further market recovery in the United States, the company will increase production in North America including Mexico from 1.1 million to 1.7 million vehicles. At the same time, Nissan will fortify its No. 2 position in Japan.

Strengthening plans for key markets of the world

Nissan has formed unique strategic collaborations with several companies, rather than following a "go-it-alone" policy, and believes that such collaborations have direct impact on the competitiveness that determines the automotive industry's leader in the 21st century.

For instance, it has five key partnerships with Daimler, Dongfeng, Ashok-Leyland, Mitsubishi Motors and AvtoVAZ.

Nissan is cooperating with Daimler regarding diesel engines and powertrains. In March 2011, Nissan and Ashok Leyland announced their first light commercial vehicle development which will be released to the market shortly.

Predicting that mini-cars will continue to account for more than one third of the new vehicle sales in Japan, Nissan and Mitsubishi Motors have jointly formed a new company, NMKV, dedicated to the product planning of mini-cars.

Nissan's consolidated revenues in fiscal 2010 registered the first increase in three terms at 8,773.1 billion yen, up 16.7%. The operating profit rose to 537.5 billion yen (up 72.5%) including 433.1 billion yen worth effect resulting from an increase in vehicle sales and improved model mix. The net profit for the year rose 7.5 times to 319.2 billion yen.

Production resumed after the great earthquake earlier than other OEMs

On June 23, Nissan announced financial forecasts for fiscal 2011. Nissan had placed an order for a large number of semiconductors, before the Great East Japan Earthquake of March 11, in anticipation of a drastic increase in worldwide production. The large stock of parts helped Nissan resume production before Toyota or Honda and return to nearly full operation in May (domestic production in May rose 0.8% to 80,036 units; global production rose 19.3% to 368,914 units). The company anticipates an increase in production and sales in the first quarter (April-June) of fiscal 2011 and plans to return to full unrestricted production in all its facilities, at home and overseas, in October.