The return of Mazda's rotary engine

Reported below are the technological directions of Mazda Motor Corporation that was presented at the Tokyo Motor Show 2015. Mazda introduced the RX-Vision Concept, announcing the revival of the legendary rotary engine. The rotary engine itself was not exhibited but the company displayed the Koeru Concept, Roadster, Demio and other mass-production cars, along with three Skyactiv-G (gasoline) and -D (diesel) engines.

(Source: Mazda press release) Mazda unveiled the Mazda RX-Vision, a concept sports car. The vehicle is powered by a rotary(Wankel) engine, symbolic of the company's "never stop challenging" spirit. Mazda developed the next-generation rotary engine, Skyactiv-R, with firm determination to defy convention and resort to cutting-edge technology for solution. The RX-Vision made a grand reappearance at the Tokyo Motor Show this year, 54 years after the rotary engine prototype was unveiled in 1961.

Mazda's pursuit for engine technology is evident. The company has already launched the Skyactiv-D that meets EUR5 and EUR6 standards without the help of a catalyst, diesel particulate filter (DPF) or other after-treatment devices. Mazda is considering to launch the engine in North America. Mazda is developing the Skyactiv GEN2 that will feature homogenous charge compression ignition (HCCI), known as an ultimate combustion system. The company has announced plans to develop the Skyactiv GEN3 that will be characterized by less engine cooling loss. Mazda seems to be following a path of its own while the European automakers are shying away from the diesel, the main contributor to reducing CO2, and rapidly moving toward 48V mild hybrid systems. 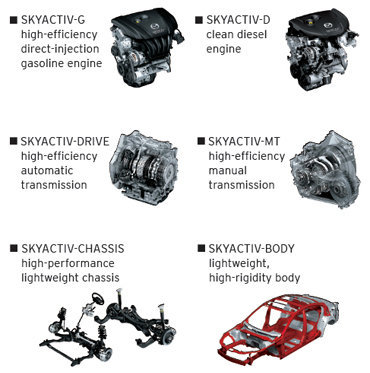