This is a continuation of a report series describing the teardown analysis of the all-new Prius performed in January 2016 by the Hiroshima Industrial Promotion Organization. The first report can be found at the following.
(4th-Generation Toyota Prius Teardown (Part 1): Powertrain units miniaturized and lightened to achieve 40km/liter fuel economy)

This report will introduce the TNGA (Toyota New Global Architecture) platform, as well as its chassis and aerodynamic technologies, which have significantly advanced the Prius's driving performance. Fuel economy was given priority in previous Prius models, but attention was given to areas related to driving performance as well in the 4th-generation Prius, and thoroughly planned out technology that rivals European cars has been worked in throughout the vehicle.

A third report will introduce the autobody and sound insulating technologies in the new TNGA platform.

A special feature of this rear suspension system is the control link being shorter than the lower arm, and since the vehicle front control link has a short rotation radius during a suspension stroke, the rear axle housing control link pivot comes inward. Because of this the rear tire has a toe-in orientation (slightly directed to the inside of the vehicle), and this structure enhances the car's handling stability.

The trailing arm has a curved shape because the point where it is fitted to the chassis is concealed in the side member.

Toyota's FF model rear suspension system for small cars, including Prius models through the previous generation, used a simple, low-cost torsion-beam suspension. However, double-wishbone suspensions are used in FF models in vehicle from the C-segment and higher, where driving performance is critical. These models include the Lexus CT200h and the second-generation Auris as well as the higher-end Harrier and the Vellfire.

The rear suspension used on the 4th-generation Prius is based on the one used on the Lexus CT200h, although the trailing arm mounting to the chassis at the front has been moved to a higher position. When the car goes over a step on the pavement and the suspension strokes, the trailing arm strokes upward as it arcs in a rear-diagonal orientation. This mounting position change reduces the longitudinal shock acting on the trailing arm bushing and improves the ride quality. This design also reduces the amount of lift on the rear suspension when the brakes are applied, which contributes to improved braking stability.

The shock absorber, supplied by KYB Corporation, is mounted to the chassis by means of a die-cast aluminum mounting, which increases rigidity and accounts for drawing out shock absorbing performance for very small strokes. Moreover, the upper rubber caps and dust boots are designed to thoroughly insulate road noises and the operational sound of the shock absorbers.

The parallel-cross frame that forms the main structure of the rear suspension member has a large sectional area, and connects at longitudinal and lateral points almost linearly. The longitudinal distance of the frame is relatively large for FF vehicles of this class. This increases the support rigidity of the suspension, which helps increase the handling stability and ride comfort. It is also shaped to effectively suppress sound and vibration from the tires.

Another reason for adopting the double-wishbone suspension is its suitability for AWD vehicles. The torsion-beam suspension used in previous models does not work for driven wheels, but through adoption of the double-wishbone rear suspension system, the suspension package for 2WD models can be used on AWD models as well with minor modifications. The AWD model has an electrically-controlled all-wheel drive system in which the rear wheels are driven by "E-Four" motor. 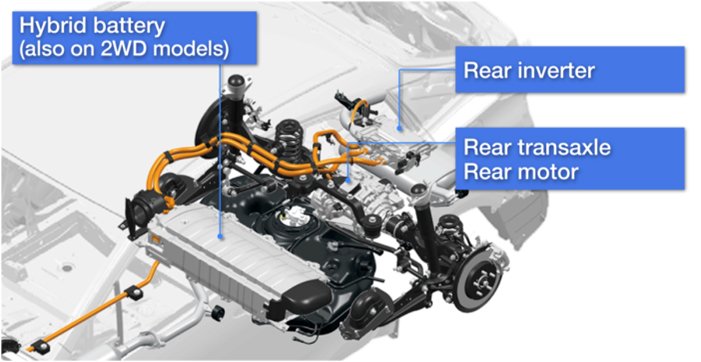 The result of incorporating these various improvements is, the rear suspension system on the Prius has a link arrangement that is very close to the multi-link rear suspension system on the VW Golf. A similar link layout is found on MFA platform models like the Mercedes-Benz A-Class, and on models like Mazda Atenza, so it could be said that this link arrangement has become standard for the rear suspension systems of upper class FF models. While fuel economy was the key concern in previous Prius models, and driving performance a low priority, the 4th-generation Prius represents a shift to emphasizing those other aspects as well.

The front suspension on the 4th-generation Prius is a strut suspension that is almost unchanged from the previous model. This is a structure commonly used on FF models, in which the coil spring is mounted on the same shaft as the shock absorber, and longitudinal and lateral forces are borne by a transverse link.

Front suspension systems around the world have a similar structure, but the front suspension on the Prius is unique in that it has a high-rigidity suspension member. Like the VW Golf and Mercedes-Benz A-Class, the basic shape forms a flat surface that is the same height with the bottom of the car's floor, and that structure generally supports the transverse link, but compared with FF cars in the same class, the sectional area is larger.

The suspension member has a large plane at both the top and bottom that form a strong structure. The steering gear is mounted to the top plane.

A reinforcing stay is used for longitudinal connection of the suspension member and front cross member. 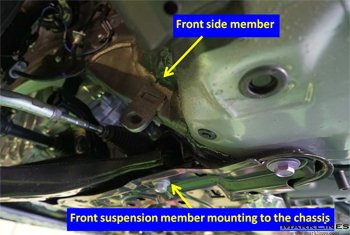 Reinforcing members are added to increase rigidity and ensure stronger mounting to the chassis. This helps increase steering response, and insulates sound and vibration from the tires to improve ride comfort and quietness.

The front axle has a unit bearing bolted to the cast iron axle housing at three points. Unit bearings are often press-fit into the axle housing in recent vehicles, but the unit bearing on the Prius has an orthodox bolt fastening structure. 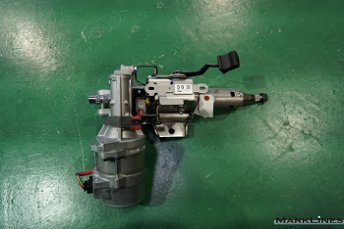 In the case of hybrid vehicles and electric vehicles, hydraulic braking and regenerative braking must be controlled in coordination. For this reason, a hydraulic booster is used in place of the conventional vacuum servo that uses vacuum from the engine. When the brake pedal is pressed, the electronically controlled brake system determines how much braking force is required from the hydraulic and regenerative brakes according to the driving conditions. The active brake booster (supplied by Advics) activates the hydraulic brake accordingly. The system-specific hydraulic power supply is built into the ABS/ESP control actuator unit.

The 4th-generation Prius has achieved a drag coefficient (Cd) value of 0.24 through various innovations. Among the improvements to the aerodynamic performance, the one worthy of the most attention is the smooth underfloor flow. From front to back, the underfloor has aerodynamic components set to line up flat to form a flat bottom. From the tip of the front bumper to the suspension members, everything other than the range of tire movement is completely flat.

An easily detachable engine oil change access cover is provided in the engine underfloor cover at the right side of the vehicle. The underfloor covers are made of polypropylene, and are designed to reduce not only the Cd value, but also the lift during high-speed cruising. This increases the high-speed stability dramatically.

The fuel tank has a flat bottom. Uneven surfaces are covered to ensure smooth flow of air from the front undercover. The rear suspension area, excluding the lower arm, is also entirely covered, and the bottom of the lower arm has been flattened to make the underside of the chassis as flat as possible. The rear muffler has been positioned behind the rear suspension in consideration of air flow, and smoothly connects to the undercover below the trailing-edge rear bumper.

In addition to the smooth underfloor airflow, the following designs have been incorporated to improve the aerodynamics.