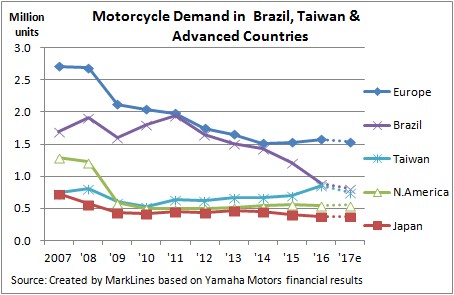 This report is the second part of an overview of major motorcycle producing countries around the world. This article summarizes the status of Brazil, Taiwan, Pakistan, as well as developed countries including Japan, Europe, and the U.S. (See the previous installment for the motorcycle markets of major countries such as India, China, and other ASEAN nations).

The production volume for motorcycles in Taiwan has seen a significant recovery since the economic crisis in 2008. In 2016 it recorded the highest sales since 2009, an increase of 8.8% to 1.22 million units due to the increase in domestic sales. In order to expand domestic sales the Taiwanese government introduced support measures for replacement sales from January 2016. Unit sales in 2016 increased by 18.0% to 788,000 units from the previous year.

Among developed countries, which experienced significant declines in their markets for motorcycles after the global financial crisis, Europe continued to see its market shrink even after the immediate aftermath. However, the market bottomed out in 2014, and motorcycle sales in 2016 rose 9.1% to 131,000 units. Although the U.S. market had been gradually recovering, it decreased by 2.1% to 490,000 million units in 2016 for the first time in six years. Japan's domestic sales in 2016 continued to see a decline in unit sales of first-class engine-equipped motorcycles (-50cc), falling by 8.3% y/y to 373,000 units. The market shrank to the lowest level in about 50 years.

At the same time, production volume in Japan, the home country of several major motorcycles makers, increased by 7.3% to 561,000 in 2016. This resulted from production of some models being shifted to Japanese plants.