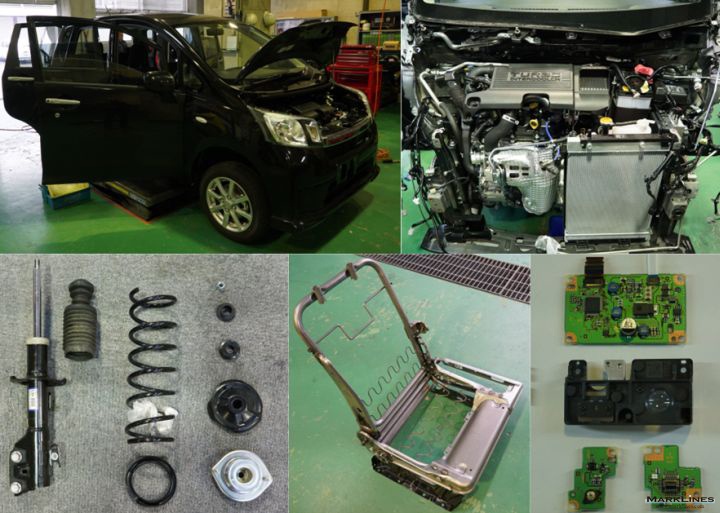 The Daihatsu Move teardown was held on January 21 through 27, 2015, by the Hiroshima Industrial Promotion Organization. The teardown event was performed by the Hiroshima Kokusai Gakuin Automotive Junior College in Hiroshima Prefecture, Japan. The fifth-generation Daihatsu Move X-turbocharged VS grade was used in the benchmarking event. The model was built in 2014 and fitted with Smart Assist crash avoidance system,

Mini vehicles are often considered synonymous with low-cost cars. However, the teardown proved that the Daihatsu Move was par with, if not better than, the B-segment cars in terms of specifications. All parts were manufactured with true craftsmanship to ensure competitiveness in performance and quality. To deliver quality performance and comfortable riding experience, for instance, costs are duly allotted to the chassis and seat frame that are normally unseen by users. The chassis suspension components are comparable with those found in larger and heavier B-segment vehicles. The seat frame has two S-springs in both the cushion and seatback, which makes the Daihatsu Move superior to a B-segment car. These support the riding comfort and quietness that the car is reputed for. The torn down model, the Daihatsu Move X-turbocharged VS grade Smart Selection SA (Smart Assist) version is equipped with a Vehicle Stability Control (VSC) system and emergency brake assist which uses front-mounted laser sensors. This report (Part 1) contains a list of parts suppliers and describes the parts that are directly related to the Move's basic performance and safety features.

Specifications of the 2014 Daihatsu Move