・According to LMC Automotive's forecast (as of the second quarter of 2021), global light vehicle production in 2021 is expected to increase by 13.8% year-on-year to 85.06 million units. This is a downward revision of approximately 1.5 million units from the previous forecast (as of the first quarter of 2021) due to the lingering effects of the semiconductor shortage.

・On the other hand, the forecast for 2022 has been revised upward by about 1 million units from the previous forecast to 93.33 million units, which is expected to compensate for this year's decline.

・As for the production of major groups in 2021, while the impact of the semiconductor shortage varies among companies, Toyota's production is expected to increase by 17.2% year-on-year to 10.77 million units. Renault-Nissan-Mitsubishi, Stellantis, and Hyundai in third through fifth place are expected to grow by approximately 20% over 2020, while GM in sixth place and Honda in seventh place are expected to grow by 3% over 2020. The growth rate of Renault-Nissan-Mitsubishi, Stellantis, and Hyundai is expected to be about 20% compared to 2020, while the growth rate of GM (6th) and Honda (7th) is expected to be only about 3%. 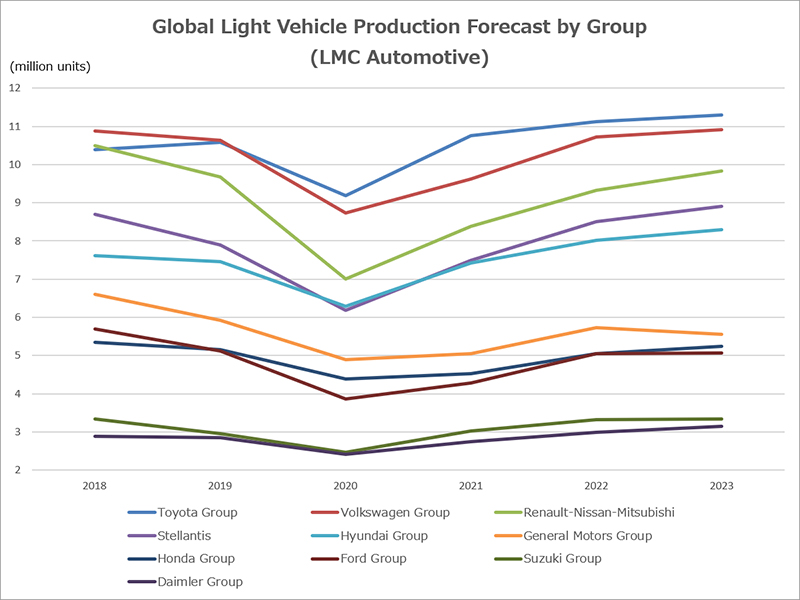