This report focuses on Mazda Motor Corporation's model plan and production capacity plan based on its next mid-term business plan called "Structural Reform Stage 2" that covers fiscal years starting from April 2016 through March 2019. The business plan was announced in April 2015.

Mazda reported net deficits in the fiscal year ended in March 2009 (FY 2009) through FY 2012. In 2012, Mazda introduced the new-generation models which adopted Skyactiv technology and a new design theme dubbed Kodo ("Soul of Motion") design. Since then, the company's performance is improving substantially due in part to the weaker yen as well.

Mazda plans to introduce eight new-generation models by the end of FY 2016 that will raise the ratio of Skyactiv models to more than 85% of its global sales and increase the corporate average fuel economy (CAFE) by 30% over the 2008 levels. The company's next mid-term business plan includes the introduction of the second-generation Skyactiv (Skyactiv Gen2) models that feature the Homogeneous-charge Compression Ignition (HCCI) combustion technology. Mazda will strengthen its electric drive technologies starting in FY 2020 and raise its CAFE by 50% in 2020 over the 2008 levels.

Mazda will strengthen overseas production especially in Mexico, Thailand and China to build a system that is least affected by currency exchange fluctuations. During the next mid-term business plan, Mazda will maintain production volumes high at home (reportedly more than 850,000 units in Japan) and meet additional future demands by increasing its capacities in plants overseas.

Mazda disclosed its financial results for the fiscal year ended in March 2015, in April 2015. At the same time, the company announced a new mid-term business plan called Structural Reform Stage 2 that covers the three fiscal years from April 2016 through March 2019. The new plan follows the present "Structural Reform Plan" that ends at the end of March 2016. The new mid-term plan calls for global sales volume of 1.65 million units and operating profit ratio of 7% or more.

It is said that the Skyactiv Gen2 models will feature Homogeneous-charge Compression Ignition (HCCI) combustion that Mazda considers as the ultimate combustion technology. Please refer to the report below for more information.

By introducing Skyactiv technology, Mazda's CAFE is expected to increase by 30% in 2015 from the 2008 levels. In the future mid-term plan starting in the fiscal year starting from April 2019 (FY 2020) following Structural Reform Stage 2, the company will strengthen its electric drive technologies and combine them with the second-generation Skyactiv technology to achieve a 50% improvement in CAFE in 2020 from the 2008 levels. In May 2015, Mazda and Toyota announced an agreement toward mutually beneficial partnership to complement and enhance each other's products and technologies. Regarding electric drive technologies, Mazda will enhance the value of Skyactiv technologies with the help of Toyota.

Agreement on building a partnership with Toyota

In 2012, Mazda launched the CX-5 and the all-new Atenza as the new-generation products fully based on Skyactiv technology and Kodo - Soul of Motion - design. Mazda now has six new-generation cars in Japanese market including the all-new Roadster that was launched in May 2015. The company plans to launch two models including the all-new CX-9 by March 2016 to have a total of eight carlines. Mazda forecasts that Skyactiv models will account for more than 85% of its global sales in FY 2016.

Mazda launched the all-new Mazda2 in September 2014, the Mazda2-based CX-3 compact SUV in February 2015, and the all-new Roadster in May 2015. The Mazda2 is produced in Japan (at Hofu plant), Mexico and Thailand and Mazda plans to sell 200,000 units a year globally. The CX-3 is produced in Japan (at Ujina plant) and sold in 120 countries. According to Mazda's forecasts, its operating profit will increase from JPY 95 billion in the first half of FY 2016 to JPY 115 billion in the second half, taking into consideration that the CX-3 and Roadster will be sold globally starting in the summer this year.

New-generation carlines launched by Mazda during the past year

Mazda produced 919,000 units in Japan and 456,000 units overseas in FY 2015. The ratio of overseas production rose from 23.3% in FY 2014 to 32.3%, up 10% after the start of production in Mexico. During the past few years, Mazda exported nearly 80% of vehicles produced in Japan. As the Japanese automaker having the highest export ratio, Mazda had net deficits in FY 2009 to FY 2012 due to global recession and yen's appreciation. The company planned to increase capacities at its plants in Mexico and Thailand to build a corporate structure that is less affected by exchange fluctuations. It was reported that Mazda was set to achieve an overseas production ratio of 50%.

With the yen growing weak since then, Mazda announced in the forecast released in April 2015 that it will "maintain high levels of utilization of Japanese plants and respond to future volume growth by increasing production at overseas plants." According to Mazda, achieving overseas production ratio of 50% is not a target and a higher efficiency could result from over-concentration of production. Hence, Mazda feels that forecasting overseas production ratio is rather difficult as the company must keep balancing the efficiency and the risk of exchange fluctuations.

Mazda started volume production of the Mazda3 (sold as the Axela in Japan) in January 2014 and the Mazda2 in October of the same year at the new plant in Mexico. Exports of the Mazda2 to Europe has also begun. An engine machining plant started operating in October and production of diesel engines started there to be fitted in the vehicles being exported to Europe. Mazda has announced plans to increase the annual capacity of the car assembly plant to 250,000 units by March 2016.

Other than the cheaper labor costs, Mexico has its strength in that it has concluded Free Trade Agreements with many countries and areas. Mazda reportedly is considering production of medium to large-size vehicles which are larger than the Mazda3 or Mazda2 in Mexico. Mazda's investment in the plant, including the engine machining plant, has reached USD 770 million.

In October 2014, Mazda started production of the Mazda2, certified as an eco-car by the Thai government, at Auto Alliance (Thailand) plant, a joint venture with Ford. The plant has two lines. The first line has a capacity to produce 140,000 pickup trucks a year and the second line has a capacity to produce 120,000 units of passenger cars a year. Mazda and Ford  previously used half of each line. Production of the Ford Fiesta in the second line ended in the first half of 2014 and the line was made available fully for Mazda in the second half of the year. Mazda needs to produce 100,000 units of Mazda2 a year in the future to comply with the Eco Car program and now the company has that capability.

In November 2014, Mazda announced the construction of an engine assembly plant in Thailand. In January 2015, Mazda started production of automatic transmissions at a new transmission plant.

Mazda's global sales volume in FY 2016 is forecast at 1.49 million units. The company expects sales increase across the world. At home, Mazda expects that it will be the only Japanese automaker that will end FY 2016 with a sales increase in Japan with the launch of the all-new Mazda2 and the newly-introduced model, CX-3.

Mazda suffered from net deficits in FY 2009 through FY 2012, but its financial standing recovered significantly in FY 2013 with the effects of the Skyactiv model launch and the weaker yen. As for the operating profits in FY 2016, the sales volume and the model mix will push the figure by JPY 40 billion. However, the depreciation of euro, ruble and other currencies will have adverse effects on exports to Europe including Russia and these negative factors will reduce the operating profits by JPY 34 billion. Mazda expects to end FY 2016 with a record-high forecast of JPY 210 billion in operating profits. The year-over-year growth was 3.4% in FY 2014 and 11% in FY 2015, but will plummet to 3.5% in FY 2016.

Mazda is investing aggressively in equipment and R&D. The company invested more than JPY 130 billion in equipment, such as increasing capacities in Mexico and Thailand, in FY 2014 and FY 2015. Mazda's R&D cost is also increasing year after year. It is expected to be JPY 125 billion in FY 2016.

Source: Mazda's Financial Results (Note) Mazda's sales volume in Japan as of June 2015 was 21,289 units including mini vehicles (preliminary report), up by 47.3% (Japanese automakers registered a 2.2% decrease overall in the home market). The cumulative sales volume during the first half of 2015 was 139,125 units, up 14.5% (whereas Japanese automakers saw an 11.0% decrease in the same period).


Sales Forecast by LMC Automotive: Mazda's sales will be 1.41 million units in 2018 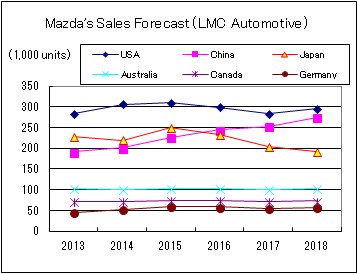 Sales in USA, Mazda's largest market by country, increased 7.7% in 2014 from 2013, outperforming the overall market which grew 5.9% YoY. Most of the growth can be attributed to the CX-5 which increased by 24.6% YoY. The CX-5 was introduced back in 2012, but it continued to ride the growth in the demand for Compact SUV segment entries, helping to propel a strong second full year of sales in the US. Also aiding growth was the Mazda6, which was up 22.0% YoY last year.