Models produced in U.S. and Canada account for 2/3 of total production 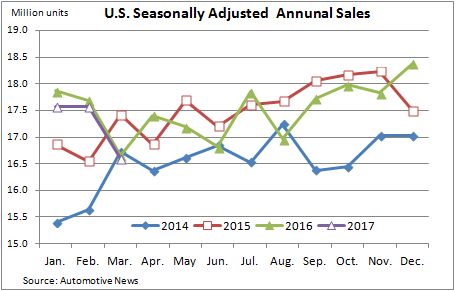 Following the November 2016 victory in the U.S. presidential election by Donald Trump, who campaigned on a protectionist platform, the automotive industry in the U.S. and around the world is nervously watching the new administration's every move. In the background of these events, the number of light vehicles sold for the whole-year 2016 reached approximately 17.56 million units (calculated by MarkLines), a slight increase over the previous year, to exceed previous records for the 2nd year in a row. The numbers were expected to be lower than the previous year, but sales soared from October 2016.

However, competition has heated up due to a slowdown in the market and inventory turnover averaging more than 60 days, which is above what is considered the appropriate level for the industry. There are reports that weak sales lead to an increase in sales incentives to an average of USD 3,600 in 2016 (close to a 20% increase in comparison to the prior year) and this is starting to have a negative effect on the finances of automakers.

The light vehicle market in 2017 is experiencing tailwinds from favorable economic trends and high expectations for the Trump presidency's growth-stimulating economic policies. At the same time, there are also headwinds such as the cycle of replacement demand from people who had been hesitant to purchase cars since the last economic downturn, a strong sense that interest rates will rise, and policy risks related to the Trump presidency. Thus, many automobile analysts estimate 2017 sales to be close to or even a little lower than 2016. Total sales of light vehicles in January and February 2017 were 2.476 million for a year-over-year (y/y) decline of 0.6%.

In a report titled "President Trump's North America International Trade Policy," the U.K.-based research firm LMC Automotive commented, saying, "Our estimate for the basic scenario (despite not having a clear image of policies) is that the U.S. light vehicle market will stay around 17.5 to 17.6 million cars for the next few years."