Factors
1) Net Sales
-The Company’s net sales in the fiscal year ended December 31, 2017 increased by 8.6% over the previous year to EUR 8,201.6 million. Excluding currency effects, the Company’s sales increased by 11.0% over the previous year. The increase in sales was due to improved sales in South America, Europe and Asia. The gains in those regions were partially offset by a decrease in revenue in North America.

2) EBITDA
-The Company had an EBITDA of EUR 889.9 million in the fiscal year ended December 31, 2017, an increase of 5.8% over the previous year. Sales growth in South America, Europe and Asia contributed to the increase in earnings, while a decline in North America and negative currency effects partially offset those increases.

4) Mechanisms
-In the fiscal year ended December 31, 2017, the Mechanisms business unit had sales of EUR 1,015.9 million, an increase of 12.6% over the previous year. Sales in the business unit primarily increased in China, Germany, Brazil, Spain, Czech Republic, Russia and North America.

-On March 1, 2017, the Company's subsidiary, Beycelik Gestamp, acquired majority of a Romanian company which located on the outskirts of Pitesti, has more than 200 employees and had sales of EUR 17 million in 2016. The Romanian plant currently supplies small and medium-sized stamped components, as well as assemblies. The new plant will enable Gestamp to serve the Romanian production plants of both Renault-Nissan Group and Ford Motor Co.

-In the Chassis business unit, the Company focuses its research and development efforts on improving qualities such as stiffness, strength, durability, and crash effects while also considering themes of weight reduction and cost savings.

-In the Company’s Mechanisms business unit, research and development focuses on weight reduction, ease of use and safety.

Products shown at IZB trade fair
-The Company displayed a variety of products and technologies at the IZB suppliers’ trade fair:

-As of December 31, 2016, the Company held more than 960 patents, utility models and applications related to its business and products. 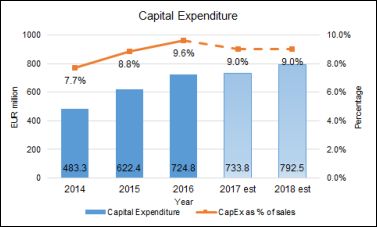 -As of March 1, 2017, the Company has ten additional production facilities under construction. In addition, the Company expects to have 13 new manufacturing facilities and 10 plant expansions fully operations by 2019.