Factors
1) Net Sales
-The Company generated net sales of USD 1,182.3 million in 2014, a increase of 3.7% compared to the same period of 2013. The increase was driven by the USA Industries acquisition, strong demand for its heavy duty OE and aftermarket products, growth in its multi-line sales, as well as favorable foreign currency impact of USD 4.6 million, despite unfavorable pricing impacts.

-The OE sales were up modestly in 2014 from 2013, driven by a 13% increase in heavy duty OE sales to several major customers. Lower sales to GM, due to reduction of GM platforms with Remy content as a result of the Company's 2007 restructuring, drove its light duty OE sales down 5% year over year despite significant increases with two major customers.

-Net sales of starters and alternators to OEMs decreased in light vehicle products, mainly driven by the end of certain North American programs, partially offset by new programs and growth in China. On the other hand, net sales to OEMs in commercial vehicle products increased, primarily driven by an increase in OES sales.

-The Company sold USD 14.1 million of hybrid electric motors to OEMs in 2014, as compared to USD 16.8 million in 2013. The decrease of USD 2.7 million was due mainly to a number of its customers delaying product launches or canceling their programs. The Company is now moderating its investments in hybrid until the market develops.

-In November 2015, BorgWarner acquired the Company, making it a wholly-owned subsidiary.

-The Company announced that it has completed the acquisition of substantially all assets of Maval Manufacturing, Inc., a Twinsburg, Ohio manufacturer, remanufacturer, and distributor of steering systems, components, and specialty products to the automotive service, original equipment power sports, and off-road specialty vehicle markets. (From a press release on March 4, 2015)

-The Company acquired substantially all of the assets of United Starters and Alternators Industries, Inc. ("USA Industries") pursuant to the terms and conditions of the Asset Purchase Agreement, effective as of January 13, 2014. USA Industries is a leading North American distributor of premium quality remanufactured and new alternators, starters, constant velocity (CV) axles and disc brake calipers for the light-duty aftermarket. Total consideration paid was USD 40.1 million in cash. In connection with the closing of the transaction, the assets were placed in Remy USA Industries, L.L.C., a wholly-owned subsidiary of the Company. The acquisition of USA Industries expands the multi-line product capabilities to North America.

-The Company was recognized by Hino Motors Manufacturing USA for its quality performance. The Company has supplied alternators to Hino Motors for approximately seven years. (From a press release on June 9, 2014)

-The Company has over 300 engineers focused on design, application and manufacturing.

-The Company has an intellectual property portfolio that includes over 400 issued and pending patents in the United States and foreign countries.

-The Company's base business, other than its hybrid electric motors, requires low levels of capital expenditures of approximately 1% to 2% of the net sales.

-During 2013, the Company invested in its manufacturing and engineering facility in Wuhan, China. All production lines were fully installed by the end of the first quarter of 2014. The manufacturing facility more than doubles its China production capacity to 4 million alternators and 1 million starters. The engineering laboratory is fully commissioned to support its Chinese customer requirements. 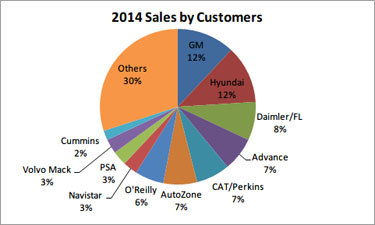