Archives of Past Exhibits:Ichikoh Industries 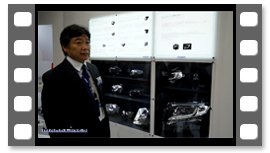 On the theme of "Lighting & Vision" a host of new technologies including LED head and rear combination lamps and door mirrors are on display.

＜Highlights＞
Side Blind Detection System
It Monitors the blind spots (about objects which are in between the direct and indirect fields of view of the mirrors ) on either side and rear of the vehicle, and provides warnings to the driver to help avoid accidents when changing lanes or making turns.
-To clearly define the detection area, the system adopted highly directional IR-Laser.
-To cover wide-angle area, it uses multiple (about 30) IR-Lasers.
- To filter out unnecessary targets for detection such as fences or walls, it conducts pulse irradiation.
-If there are any objects within detection area, the light source (LED warning light) installed on mirrors or door mirror housing illuminates to warn the driver.
-The system can be used independently of car navigation monitor.
-Currently being proposed to automakers. Practical use is expected to start in three to five years.

-In view of the fact that mandatory attachment of headlamp cleaner is under consideration in Japan, the Company is tackling with the challenges regarding its performance, reliability, design and standardization. The system is currently mounted on Citroen A4.
Features:
-Cleans headlamp only with water pressure using water in a washer tank
-Can be used for lamps with various forms by adopting a variation of nozzle strokes

The Company has not exhibited main beam using LED as it is a light source under development, but this time decided to exhibit it for the first time in consideration of recent developments in LED performance.