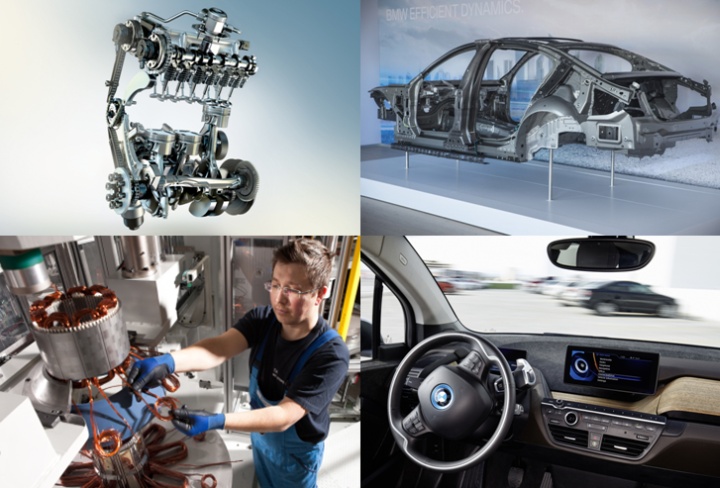 Previously, BMW has been cultivating its identity through high-performance, highly efficient engines and superior handling stability. However, BMW is now taking steps toward advancing its previous characteristics, while making large changes towards moving in a new direction. Until now, the focus of BMW's appeal was its straight six-cylinder engine. This engine has been downsized, and the company's main models now feature 4-cylinder direct-injection turbo engines, and models that previously wore 4-cylinder engines now have 3-cylinder turbo engines.


The i series, represented by the i3 and i8, incorporate the state-of-the-art EV and PHEV technologies, and an innovative body structure utilizing CFRP and aluminum modules. Currently, the advanced technologies of the i3 and i8 are being expanded and incorporated into the conventional core lineup. The X5 and 3 series now have plug-in hybrid versions, with further lineup expansion planned. Furthermore, large-scale reductions in vehicle weight are underway, utilizing state-of-the-art technology such as use of CFRP in the body frame for the next-generation 7 series, along with heavy use of aluminum.

Japanese manufacturers have a lead in the fields of EVs, HVs, and PHVs. However, they have put a priority on economical environmentally friendly cars and their cars have been built with a focus on reducing costs, aside from the electronic technologies. BMW pursues performance and high efficiency with 3 advanced technologies: direct-injection turbo engines, weight reduction, and PHV.

Another advanced technology that BMW is focusing its efforts on is driver assistance technology for future autonomous driving. At the 2015 Consumer Electronic Show (CES), BMW unveiled an i3 prototype with two advanced driver assistance systems. The featured systems are a collision-avoidance system that utilizes four laser scanners to identify obstacles and controls automatic braking, and an advanced automated parking system controlled by a smartwatch, which allows the vehicle to drive autonomously in and out of parking spaces.

As a result of increasing individual product competitiveness and enhancing BMW's brand image through active technology development, the company's global unit sales and earnings continue to grow. The 1st quarter performances in 2014 and 2015 marked record unit sales, earnings, and operating income, and further investment in China and North America for enhancing production capacities is currently underway.


Toward 3-, 4-, and 6-cylinder next-generation modular engines

In the European market, both direct-injection diesel and gasoline turbo engines are experiencing fierce competition in increasing fuel efficiency and performance. BMW is continually a top contender for all engine sizes. BMW has outstanding technology in output torque and fuel consumption, as well as in areas such as noise and vibration dampers, making BMW's diesel engines indiscernible from gasoline engines in terms of quietness.

The next generation engines will be given the unified name of BMW TwinPower Turbo Technology. Many of the engine components are made from aluminum and magnesium to reduce weight. The engine has various features, such as twin scroll turbochargers, a high-precision direct injection system, the continuous variable valve lift control system Valvetronic, and the variable camshaft control system.

Additionally, the 4-cylinder engine is being developed as both a gasoline and diesel engine. The 4-cylinder engine, unveiled in 2014, has common parts for astoundingly high 60%. Furthermore, 40% of the structural components of the engine are similar (following standardized design principles).

This next-generation engine was first introduced with the 1.5 liter 3-cylinder gasoline engine in the i8, released in 2014, and incorporation into all models is underway.

The 3-cylinder engine featured in the i8 has a maximum output of 170kW/231PS, and a maximum torque of 320Nm, and although it is a small displacement engine, it produces a high output of 57kW/77PS per cylinder. By combining this lightweight, compact engine with an electric power unit and overall reduction in weight, the engine realizes a high dynamic performance unique to sports cars.

In recent years, models featuring the conventional 6-cylinder engine have been downsized and replaced with 4-cylinder turbo engines. This next-generation 4-cylinder engine will be featured on various vehicles as the main engine for all models. The basic grade of a gasoline version has a maximum output of 135kW (184PS), and a maximum torque of 270Nm, whereas the high-grade version boasts 180kW (245PS) and 350Nm, and will be available for various models. There are 3 specs for the diesel engine producing maximum outputs of 105kW (143PS）, 135kW (184PS), and 160kW (218PS), with maximum torques of 320Nm, 380Nm, and 450Nm, respectively.

The first model to feature the next-generation inline 6-cylinder engine will be the 340i from the 3 series. The maximum output is 326hp/5500-6500rpm and maximum torque at 45.9kgm/1380-5000rpm. The new model outperforms the conventional 335i by 20hp and 5.1kgm. The engine of the 340i sedan featuring an 8-speed Steptronic accelerates from 0 to 100km/h at 5.1 seconds, with a maximum speed of 250km/h (limiter engaged). Meanwhile, the engine reduced CO2 emissions, an important factor in Europe, by over 10% compared to the engine of the 335i.

Japanese manufacturers have taken the lead in EVs and HVs, but BMW is now aiming to take the top position in this field all at once. The i3 debuted in 2013 as BMW's first mass-produced EV. The i3 generates a maximum output of 125kW/170PS, with a maximum torque of 250Nm, while carrying a 18.8kWh lithium-ion battery. The revolutionary vehicle structure reduced weight, keeping the vehicle weight at 1260kg.

Following the i3 launched in 2013, the i8 was launched in 2014 as a plug-in hybrid featuring the aforementioned 3-cylinder, 1.5-liter turbo engine and an electric motor with a rated output of 96kW/131PS, and maximum torque of 250Nm. The i8 is a sports car of a new genre achieving both sports-car driving performance and compact car-level fuel consumption. The plug-in hybrid system, developed specifically for the i8, is one of BMW's technological symbols, balancing both driving performance and high efficiency.

Subsequently, after the release of the i series, BMW released the BMW X5 xDrive40e in March 2015 as a mass-produced plug-in hybrid. Featuring a 4-cylinder gasoline TwinPower Turbo Technology engine and synchronous electric motor, the vehicle produces a system output of 230 kW [313 ps]. The BMW X5 xDrive40e has a combined fuel consumption of 3.3 to 3.4-liters/100km, and combined power consumption is between 15.3 to 15.4 kWh/100 km. CO2 emission volumes are 77 to 78 g/km (on the European test cycle for plug-in hybrid vehicles).


Innovative body with wide use of CFRP and aluminum

The i3 and i8 were released in 2013 and 2014, respectively. Both models featured an innovative structure: A Life Module cabin unit composed of a CFRP monocoque structure, and an underfloor Drive Module unit, which comprises an aluminum powertrain and chassis component. These vehicles were the first to use CFRP as the main material for the body frame, after low-volume production supercars. By using CFRP, which excels in body rigidity and passenger protection, the body unit is 50% lighter than the body made from steel, and 30% lighter than the body made from aluminum. To increase CFRP productivity for the i3 and i8, BMW favored thermoplastic resin molding instead of the conventional thermosetting resin molding and build vehicles at general mass-produced car production speeds. Combined with the underfloor aluminum Drive Module, the reductions in weight negates the increased weight from the battery, and the i3 achieves a vehicle weight of 1260kg.

The next-generation 7 series, scheduled for release in 2016, will not only use aluminum and ultra high-tensile steel sheet, but also CFRP for major segments of the body frame. Primarily, a CFRP column passes through the steel frame, which connects the A pillar, roof rail, and C pillar. CFRP is also used as the structural members for the 3 roof bows connecting the left and right roof rails, and as reinforcing members for the B and C pillars, center tunnel, and the side sills. Additionally, the next-generation 7 series extensively use aluminum for the engine compartment structure, and is planned for a maximum weight reduction of 130kg from the current model.

At the 2015 CES, BMW unveiled the i3 prototype with two advanced driver assistance systems. The first is the Advanced 360-degree Collision Avoidance System, which identifies obstacles with 4 laser scanners, and avoids collisions by automatically activating the brakes when the vehicle closes in on obstacles such as a wall or pole. Even if the vehicle unexpectedly rapidly approaches a pole or wall, the system is capable of stopping the car with centimeter precision. With the introduction of this system, driver stress can be reduced even in conditions with low-visibility. The second system is an advanced Fully-Automated Remote Valet Parking Assistant System. This system drives automatically without using GPS, and instead uses pre-prepared digital maps of the layout of building internal structures, and an onboard laser scanner. Even if the driver exits the vehicle, by using a smartwatch, the drivers can have the vehicle move autonomously to a designated parking spot, as well as be called upon to arrive at a designated location, much like valet parking.

Furthermore, relating to the driver assistance systems, BMW is actively making developments in the connectivity field. The BMW i model is capable of connecting with the Apple Watch, which was recently released in April 2015. The Apple Watch is capable of displaying the vehicle battery charge and locking status, as well as of controlling internal temperature.

BMW is advancing various developments as a pioneer in autonomous driving. In 2009, at the north course of the Nurburgring in Germany, which is known for being a track with the world's most rigorous conditions, BMW had conducted a test to have the vehicle drive autonomously at expert-driver level limit speeds. Furthermore, BMW is developing a system where the vehicle will automatically stop at the side of the road while checking surrounding traffic conditions if the driver is suddenly unable to operate the vehicle while driving on highways due to cardiac arrest, etc. In 2011, BMW also ran an experiment to have a vehicle drive without any driver input from Munich to Nuremberg on the Autobahn. All manufacturers are currently hard at work developing autonomous driving and driver support system technologies, and competition among manufacturers to see who can gain the initiative is becoming evermore intense. Among such conditions, BMW has been engaged in joint research and development with Continental since 2013 to achieve advanced autonomous driving by 2020.

The 1st quarter (January to March) performances for 2015 have also seen record highs. The sales figures have increased by 14.7% from the previous year to EUR 20.92 billion, the EBIT increased by 20.6% to EUR 2.52 billion, the operating profit margin (EBIT/sales figures) increasing by 0.6 percentage points to 12.1%, and net profits have increased by 4.0% to EUR 1.52 billion. Unit sales, profits, EBIT, and pretax profits have recorded record highs for 1st quarter performances. 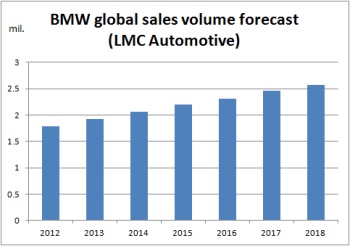 BMW Group global growth continues on its robust trend. New products continue to support the competitive extension and growth of the group's brands. This has energized BMW's factories, many of which are running flat-out. New localized investment plans should ensure that BMW can support new demand. BMW is set to add another North American assembly plant by 2019.

Moving into 2015, the Group will build on the success of its earlier launched 4-Series and X5, by adding an all-new US built X4 model. Mini's rejuvenated range will also provide positive growth impulses.

Expansion in output of China's new Shenyang plant have helped to push global volumes over 2.1 million units in 2014, and with additional models expected to be added in the next few years, local Chinese volume will increase further. Sales in China in 2018 are expected to be in 746,000 units. Asia's growth is largest among regional sales.