The 43rd Tokyo Motor Show was held from November 20th to December 1st, 2013 (opened to the public from November 23th). The number of visitors increased by 7% from the previous show to about 902,800 (announced by the organizer).

This report covers the concept cars that were exhibited by Japanese automakers at the show (Another report will follow shortly covering the concept cars of mini vehicles and production models slated for market launch in the near future).

Toyota unveiled a design concept of the fuel cell vehicle (FCV) that will reach market in 2015. Nissan suddenly introduced two versions of its concept car, IDx, that show a method of joint development involving customers.

Mitsubishi, Fuji Heavy Industries (FHI: Subaru) and Suzuki  each unveiled plural SUV concepts which suggested that SUV was the mainstream in their market strategy.

Honda exhibited a next-generation concept of the super sports car, NSX, whose production was once discontinued in 2005. Toyota presented a concept of an open-top model based on the 86 Compact Sports Car.

(Note) The "*" sign is attached to the model names that were unveiled at the Tokyo Motor Show 2013.

Toyota Motor Corporation (Toyota) displayed the TOYOTA FV2 (world premiere), a personal vehicle designed under the theme of physical and emotional communication with the driver. Another world premiere by Toyota was the JPN Taxi Concept that previewed the next-generation taxicabs. 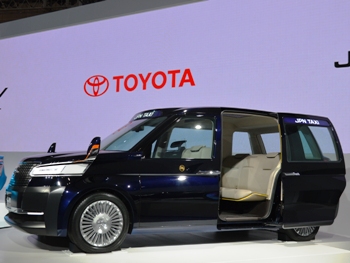 In November 2013, Mitsubishi Motors Corporation (Mitsubishi) announced its mid-term business plan named "New Stage 2016." The plan defines the pickup trucks, SUVs and crossover models as the strategic products, because these models are the main contributors to the company's global sales. It also calls for increasing production ratio of its electrified vehicles to 20% by 2020.

Accordingly, Mitsubishi will launch all-new Triton pickup truck and the Pajero Sport in the fiscal years ending March 2015 (FY 2014) and March 2016 (FY 2015) respectively. The company is also developing the all-new Pajero, the RVR, and the Delica D:5, along with plug-in-hybrid vehicle (PHV) technologies. These products and technologies will be introduced successively in the market in and after FY 2015. Mitsubishi exhibited three SUV concepts at the Tokyo Motor Show, each clearly reflecting the company's strategies and original electrification technologies.

FHI (the automaker of Subaru automobiles) unveiled the seven-seater CROSSOVER 7 CONCEPT that may reach markets in 2015. Another world premiere by FHI was the CROSS SPORT DESIGN CONCEPT (based on the BRZ) which is a B-segment SUV not found in its ongoing lineup. The company also introduced its next-generation automotive technologies including autonomous driving adopted in the VIZIV EVOLUTION CONCEPT.

Honda and Toyota each exhibited their sports car concepts. Honda's NSX Concept is a super sports model that may reach markets in 2015. Toyota's FT-86 open-top concept is based on the compact "86" sports model. Other sports-type mini-vehicle concepts exhibited at the show, such as Honda's S660 Concept and Daihatsu's KOPEN, will be introduced in the upcoming report.