The 42nd Tokyo Motor Show was held for ten days from December 2nd to 11th, 2011 (Press days were on November 30th and December 1st). The venue was transferred to the Tokyo metropolitan area for the first time in 24 years; the Motor Show was held at the Tokyo Big Site for the first time. At the 41st Tokyo Motor Show, which was held after the recession in 2009, no commercial vehicle manufacturers and overseas OEMs participated. At this Motor Show, commercial vehicle manufacturers took part again and overseas OEMs centered on European OEMs exhibited their products, giving life to the Motor Show. The number of visitors during this Motor Show increased by 37% from the 41st Tokyo Motor Show to about 843,000 (announced by the organizer).

The exhibition report has been broken down into five reports - two for Japanese OEMs, overseas OEMs and two for parts suppliers. This is the first report that covers Japanese passenger car manufacturers' concept cars and production models (planned to be launched).

Each of the Japanese OEMs (excluding Mazda) exhibited concept cars of PHVs, EVs, and ultra-compact EVs, which shows that they put strategic priority on electric-powered vehicles. On the other hand, Toyota 86/Subaru BRZ RWD sports car, which is scheduled to be launched in 2012, attracted attention, while Nissan/Honda showcased EV sports car concept; OEMs appear to demonstrate driving pleasure to appeal to the visitors.

Among OEMs, Toyota focuses strategically on every type of vehicles from a fuel cell vehicle, PHV, EV, to HV, including the Fun-Vii concept car, which was called a moving smart phone. On the other hand, the concept cars that Nissan exhibited were all EVs, which show its effort on "zero-emission." Honda unveiled a sports EV concept and a PHV concept and also showcased four concept mini passenger cars.

A noticeable exhibit is Mazda's focus on the internal-combustion engine, particularly on the diesel engine that is not common in Japan. Mazda assumes to use a diesel engine in the concept car (TAKERI), which it unveiled.


PHV: Toyota exhibits the Prius PHV, which it will launch in 2012, while Honda, Mitsubishi, and Suzuki showcase PHV concepts

Each OEM exhibited plug-in hybrid vehicles (PHVs), which are considered to be next-generation eco-friendly cars following hybrid vehicles (HVs). Toyota unveiled the Prius PHV in Japan, which it will launch in January 2012. Honda, Mitsubishi, and Suzuki each showcased a PHV concept, the AC-X, the Concept PX-MiEV II, and the Swift EV Hybrid, respectively, for the first time.

In addition, Toyota unveiled the Aqua compact HV, which it launched in December 2011. 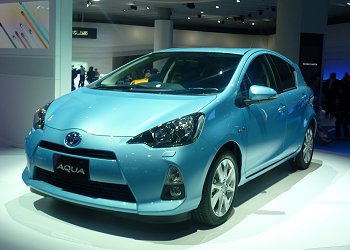 
EV concept car: Toyota exhibits a compact EV to be launched in 2012 while Nissan and Honda showcase an EV sports car

Nissan unveiled the PIVO 3, an ultra-compact EV with an in-wheel motor, which boasts a minimum turning radius of 2m. In addition, Honda, Suzuki, and Daihatsu exhibited commuter ultra-compact EV concepts with overall length of about 2.5m. In the background, governors of 35 prefectures in Japan proposed, in February 2011, a concept "Automobiles friendly for elderly people" (a 2-seat compact car with the overall length of up to 2.8m with the cruising range of about 60km) and requested its development to each OEM.

(Note) At this Motor Show, Nissan also exhibited a tandem 2-seat ultra-compact EV, the New Mobility Concept. This concept car is a version with slightly-revised exterior of the Twizy, which Renault will launch in Europe next year.


Fuel cell vehicle concept: Toyota exhibits a sedan version that it aims to launch around 2015

Two OEMs in the Toyota Group exhibited fuel-cell vehicle concepts. Toyota unveiled a sedan version that it aims to launch around 2015, while Daihatsu a mini commercial vehicle concept that is powered by liquid fuel.

Mazda unveiled a midsize sedan concept, TAKERI, which employs SKYACTIV-D diesel engine and a regenerative braking system that uses a capacitor. Suzuki unveiled the REGINA, a next-generation global compact car concept that is made lighter and has enhanced aerodynamic performance.

In addition, Toyota unveiled the Fun-Vii, a concept car that heralds a future where people, cars and society are linked.


Production models: Toyota and Subaru exhibit the 86/BRZ, a RWD sports car that they jointly developed, while Mazda showcases the CX-5, which has totally adopted SKYACTIV technology

Concerning production models (planned to be launched), Toyota and Subaru jointly developed and unveiled a prototype of RWD sports car, Toyota 86/Subaru BRZ, which attracted much attention. Mazda unveiled a new model, the CX-5, which has adopted SKYACTIV technology on a full-scale.

(Note) The model is marketed in the US as the FR-S under Scion brand.

Mitsubishi unveiled the Mirage, a global car that it produces in Thailand. Daihatsu and Suzuki showcased the Mira e:S and the Alto eco, respectively, which have achieved fuel economy of more than 30.0km/L in the JC08 mode. Honda unveiled the N-box, with which it aims to turn around its mini vehicle business. 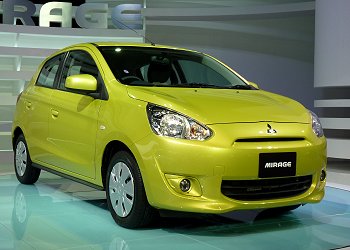