Minimum Wages in Asia - The Automotive Industry in 2015 -

MarkLines Co., Ltd. compiled minimum wage data for eight focal points of the automotive industry in Asia as of January 2015.

The Thai government had announced a raise in the daily minimum wage in seven prefectures including the Bangkok Metropolitan Area and Phuket to THB 300 in April 2012, while also uniformly increasing the minimum wage rate in remaining 70 prefectures by 39.5 percent. During the period from 2013 to 2015, the daily minimum wage rate of THB 300 (approximately USD 200 on monthly basis) is applied throughout the country, which is controlling a sharp rise in wages.

The Government of Malaysia introduced a minimum wage system for the first time in 2013. The monthly minimum wage in the entire Malay Peninsula is set at MYR 900 (approximately USD 260).

The minimum wage rate in Vietnam varies by region: VND 3.1 million (approximately USD 155) per month in Region I which includes Hanoi and Ho Chi Minh City; VND 2.75 million (approximately USD 140) in Region II which includes Tinh Vinh Phuc and Da Nang. Both figures are relatively low compared to other ASEAN countries. However, the rate at which the minimum wage has increased is high, about 2.3 times the wages provided in 2010 for Region II.

The minimum wages of the areas in Indonesia and the Philippines covered by this survey are above the national average, because the automotive industry of these two countries is concentrated in the metropolitan area. When looking at real wages, it should be noted that the standards for setting minimum wages differ by country. In Indonesia, the minimum wage is determined based on the "Kebutuhan Hidup Layak (KHL:Eligible Lifestyle Needs in English)" indicator, which considers necessary items for living including clothing, foods and housing. Thus, the real wage of workers in Indonesia seems to be almost equivalent with the minimum wage. In China, a workers' real wage is about twice the minimum wage when allowances not included in the minimum wage are factored in. 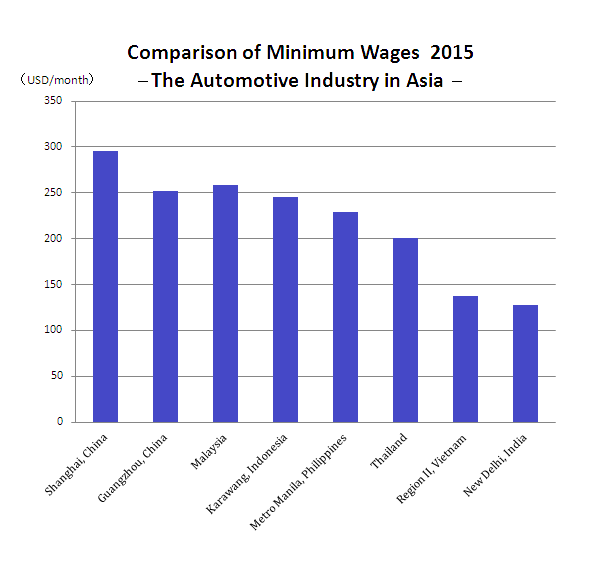 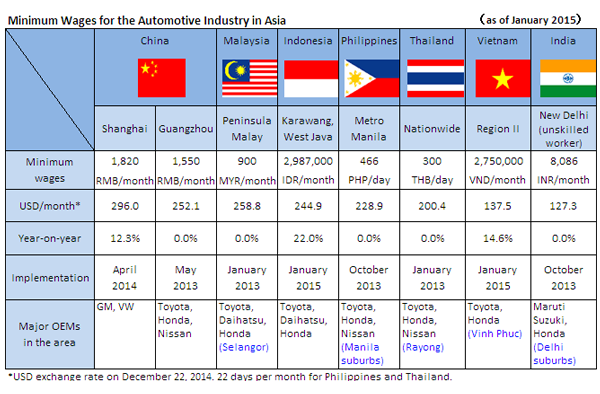 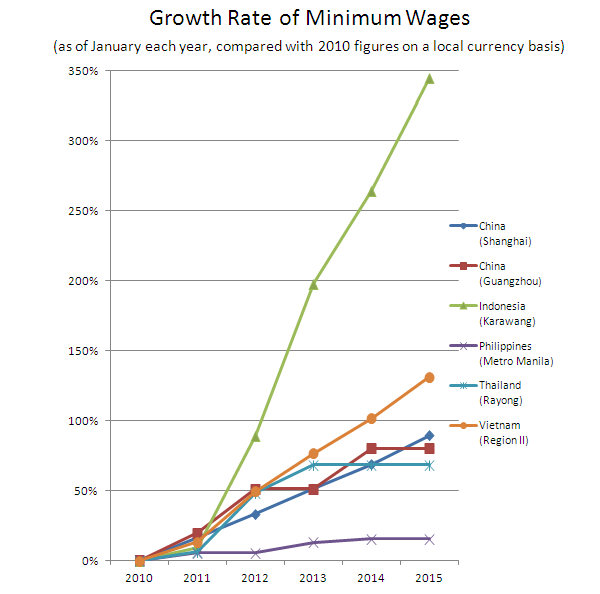 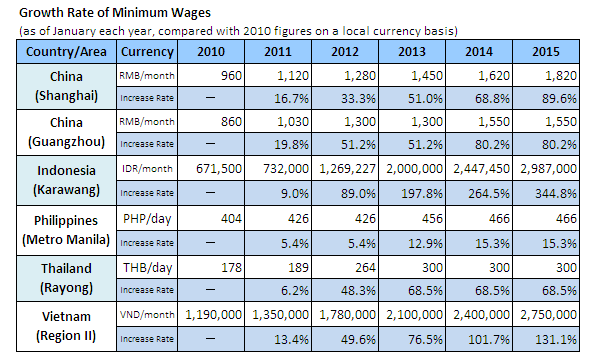 ・Each province and directly-controlled municipality determines its minimum wage. The timing of revisions differs by region.

・The minimum wage system was introduced to limited areas in 2013. Full enforcement started in 2014 and the first revision is scheduled to be announced in early 2015.

・The minimum wage for the period from 2013 to 2015 is THB 300 per day throughout the country.
・Through 2012, each region annually revised their minimum wage independently.

・Minimum wages vary by region (from Regions I to IV), with wage revisions announced once per year. Different wages were set for foreign-affiliated firms and domestic firms prior to September 2011. The wage systems were integrated together in October 2011.
・Region I, which includes Hanoi and Hoh Chi Minh City: Monthly minimum wage is VND 3.1 million for 2015.
・Region II, which includes Vinh Phuc and Da Nang: Monthly minimum wage is VND 2.75 million for 2015.

・Each state government sets its minimum wage rate by sector, which are revised at least once every five years.
・The minimum wage in New Delhi has not been announced since the last revision in October 2013. (as of Dec. 31, 2014)