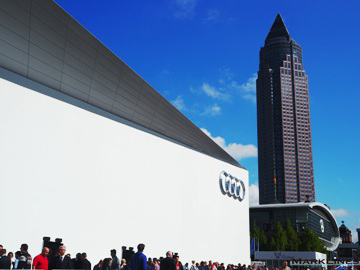 The IAA Frankfurt Auto Show 2015 (Internationale Automobil-Ausstellung: IAA 66th) was held at Messe Frankfurt between September 17th and 27th, with press days on September 15th and 16th. This is the first of a three-part series of MarkLines' reports covering exhibitions by OEM.

This first report summarizes the latest developments of three OEMs based locally in Germany (Daimler AG, BMW AG, and Volkswagen (VW) AG). Daimler premiered the Concept IAA transformable concept vehicle, attracting the attention of many visitors by displaying its various production models within one entire hall, as it customarily does.

VW exhibited the same presence as it has every year, that was, until September 18th on the second day of the Auto Show when its diesel emissions scandal was revealed in the U.S. On the eve of the Auto Show (September 14), the VW Group announced that it will introduce at least 20 plug-in hybrid vehicles (PHVs) and electric vehicles (EVs) by 2020. Audi's and Porsche's all-electric concept vehicles, which were being exhibited when the announcement was released, were nevertheless extremely popular with the visitors.

In addition to the three Germany-based OEMs, several other major European OEMs, namely Renault S.A., PSA Peugeot Citroen, Fiat Chrysler Automobile, and Jaguar Land Rover Automotive PLC, exhibited their vehicles at the Auto Show. Volvo Car Corporation wasn't present at this Show, adhering to its policy of exhibiting at only three auto shows a year, i.e., the ones held in Detroit, Geneva and Beijing/Shanghai.

From the U.S., General Motors Company displayed Opel models, but it did not exhibit Chevrolet and Cadillac models, which it had exhibited at the previous Frankfurt Auto Shows. Ford Motor Company and Tesla Motors Inc. also displayed their vehicles.

Details of these non-German OEMs' exhibits will be reported in sequels to this report.