Factors
1) Net Sales
-In the fiscal year ended December 31, 2014, the Company had net sales of SEK 4,380 million, an increase of 11.7% over the previous year's sales. Excluding currency effects, sales grew approximately 8% from the previous year. Sales grew in all regions except for South America, which remained level compared to the previous year.

Relocation of operations from Heidelberg, Germany to Hungary and U.K.
-In September 2014, the Company began its previously announced relocation of manufacturing operations from Germany to Hungary. Air suspension products and EBS brake systems will continue to be produced at the plant in Heidelberg, Germany, while production of other systems will be moved to Szentlorinckata, Hungary. R&D activities will be transferred to the R&D center in the U.K. Upon completion of the relocation, the Heidelberg facility will have approximately 100 employees. The relocation is expected to complete at the end of 2015, and is expected to result in SEK 85 million in savings per year.

-The Company has signed a long term agreement with Daimler's trailer axle division, Mercedes-Benz TrailerAxleSystems, for the supply of its ModulT disc brake. The production is expected to start in the end of 2015. The ModulT disc brake is based on the Company's second generation disc brake, which was first introduced on the market in 2011 and has more than doubled in production every year since then. The agreement with Daimler is one of several new wins on disc brakes that in combination are estimated to be worth SEK 650 million until 2017. (From a press release on September 8, 2014)

-The Company has three primary facilities for product development located in Sweden, the U.K., and the U.S. Supporting these facilities are a number of regional application centers.

-The Company announced that MIRA Technology Park in Hinckley, U.K., has opened a new 25,500-square-feet facility that is housing the new Haldex R&D center. The R&D center serves as a European research and development base for the Company's global product offerings, includes laboratory facilities and provides engineers with direct access to MIRA's own test facilities and engineering expertise. The new facility houses a fully-equipped design and simulation center, full validation laboratory with integrated electromagnetic compatibility (EMC) facilities and a series of garage workshops housing multiple development vehicles. (From a press release on February 13, 2015) 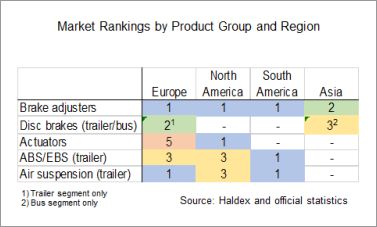