FY ended March 31, 2015
-Net sales in FY ended March 2015 decreased by 1.2% to INR 4,148.9 million year-on-year. This is due to the sharp fall in the Company's primary market comprising tractors in India. The reduction in domestic sales was largely offset by a growth in exports. 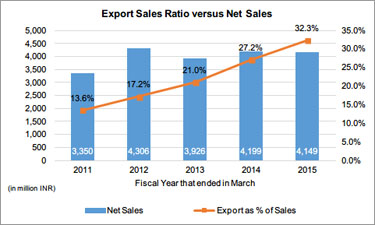 -The Company has embarked on a long term strategy in the last few years that focused on growing exports. The share of exports in net sales has been increasing steadily from 13.6% recorded in FY ended March 2011 to more than 30% in the fiscal year that ended in March 2015.

FY ended March 31, 2013
-The Company is developing a new process to manufacture shafts and planetary gears which will improve the compressive strength of the components.

FY ended March 31, 2013
-In May 2012, the Company started construction on its third plant in Lonand, Maharashtra. The plant is planned to be inaugurated in May 2013, and will shortly begin the process of testing and commissioning various machines. This will then be followed by trial production. Commercial production at the new plant is scheduled to begin some time in the FY ending March 31, 2014. The plant will initially focus on manufacturing transmission gears.