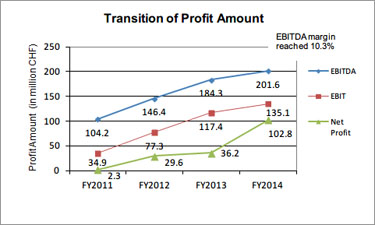 -EBITDA of FY ended Dec. 2014 was CHF 201.6 million including a rise by CHF 17.3 million over FY 2013. It showed a record high EBITDA margin of 10.3%.
-Net profit of FY2014 was CHF 102.8 million multiplied from CHF 36.2 million for FY2013.
-Factors of profit increase were the successfully implemented capacity adjustments and associated enhancement of capacity utilization at the existing plants in Europe, the expansion of vertical integration through the in-house production of basic materials and higher production volumes in Asia.

From Luxury class to Medium class
-The Company is expanding its range of high-quality carpeting for vehicles and now offers the premium carpet quality of the luxury class in the compact and medium class. The new Clean-Tuft technology provides considerable added value in terms of cleanability and durability compared to the non-woven carpets usually found in these vehicle classes. (From a press release on January 12, 2015)

From European market to North American market
-The Company will begin producing its specifically designed fiber technology Ultra-Silent for the North American market in the United States from 2015 onwards. This technology is currently utilized at the Company's sites in Europe only and is deployed for underfloor and under engine shields with German premium car manufacturers, among others. With Ultra-Silent, the Company is offering the lightest and most powerful underbody systems for vehicles: in comparison with conventional plastic solutions, they are up to 50% lighter. At the same time, they absorb sound, thereby reducing the interior and exterior noise of vehicles. (From a press release on March 5, 2014)

Increase "Vertical" range of manufacture through the production of basic materials
-In 2014, the Company invested in additional carpet and felt production lines in Europe and China, facilities for the production of damping materials in South America and new facilities for the manufacturing of tailor-made felt blanks for bulkhead and floor components at North American and Asian locations. This will enable the basic material for components and products to be manufactured with a high share of proprietary value creation.

From Switzerland to North America
-ERP system introduced in Swiss locations in 2013, this was also implemented at all North American locations (US, Canada and Mexico) in 2014. The cross-divisional standardized business processes form the basis for future efficiency improvements.

-The Company announced that it has set up the new company Autoneum Korea Ltd. to ensure that Korean automobile manufacturers have access to its range of high-performance acoustics and thermal management solutions in future. Autoneum Korea was jointly established by Autoneum and the Korean automobile supplier SH Global (SHG) as minority shareholder. Korean manufacturers can benefit from Autoneum's expertise and comprehensive product range - which includes engine covers, underbody shields, heatshields and carpet systems - right from the vehicle development and prototype stage. The serial production of the components will take place at the facilities of the Korean partner SHG in Incheon and Daegu. (From a press release on June 17, 2014)

-Research and development expenditures in 2014 and 2013 focused on the development of acoustic solutions, underbody components and carpets for new models and customer specific requests from automobile manufacturers in Europe, America and Asia.

Heat shield with Sound absorption capability
-The Company is expanding its range of lightweight and multifunctional heatshields. Using aluminum heatshields, which are based on RIMIC technology, the Company has developed a special perforation of the aluminum, which absorbs vehicle noise effectively. Using in-house production processes, these perforations are applied specifically only at predefined areas to ensure optimal heat protection and durability. The acoustic performance is thus controlled by the number of perforations. Furthermore, high-frequency sounds can now also be absorbed by combining them with a sound absorber developed by the Company, too. The REMIC based heatshields are currently being used in vehicle models by European and Japanese automobile manufacturers. (From a press release on April 29, 2014)
Needle punch carpet "Di-Light"
-Carpet systems made on Di-Light not only weigh less than standard needlepunch carpets but are considerably more durable and therefore offer enhanced haptics and optics. The material, produced of recycled PET bottles, will enter serial production for needlepunch carpets in European and American car models from 2015.