The Western European automobile market is showing signs that unit sales have finally reached bottom. Gradual growth is anticipated over the next few years as general economic conditions are expected to improve. Top executives from several automotive OEMs have also expressed optimism that the Western European market has stabilized. Many companies have reacted by announcing model updates or new introductions in the next few years. Meanwhile, excess capacity is still a problem in the region as some companies are undergoing extensive restructuring to bring it in line with demand.

LMC Automotive also sees modest potential for growth for cars in the near- and mid-term. The company states, "However, the West European car market (at 11.4 million units) is likely to finish 2013 nearly 3.5 million units lower than 2007 with only a modest improvement likely in 2014." The decline in 2013 equates to a (3.2%)decrease from 2012 results. 2014 is expected to venture into positive territory with a slight growth of just over 1%.

As of the Q2 2013 forecast, LMC Automotive sees economic indicators that the Eurozone is starting to stabilize. Consumer confidence has also been trending upward in the region. LMC comments, "The Eurozone economy is expected to return to growth in the second half of the year, albeit slowly, which will provide support to the car market." Rapid recovery is not expected because the region is likely to exercise fiscal restraint, despite political pressure to loosen austerity measures. As a result, the full-year sales forecast for cars in Western Europe has been revised. As of August 2013, the expectation is for 11.4 million unit sales, a decline of (3.2%)over the previous year. Slow economic expansion is expected over the next few years. LMC does not anticipate Western European sales to reach the peak level of 16.8 million units that it saw in 2007 through the rest of this decade.

Despite the continued struggles within the Western European market, most European automakers in the region were able to turn a profit in 2012. Factors that contributed to this were sales outside of Europe, especially in China and the United States, and improvements in production efficiencies. The lone Western European-based carmaker to lose money was PSA Peugeot Citroen, which is moving to shift a higher percentage of its sales overseas, particularly to emerging markets. Fiat-Chrysler and Renault-Nissan were able to realize a profit due to the strength of their sales from overseas alliance partners. VW and BMW earned record profits while Daimler also had a very profitable year.

US automakers GM and Ford are currently restructuring their respective European operations. This includes eliminating excess capacity, cutting costs, and investing in new products. Both companies are showing good progress and reported smaller-than-expected losses in the second quarter of 2013. GM is on pace to meet its goal of "slightly" better results over the previous year's loss. In July 2013, Ford announced that it expects to turn a full-year profit in 2015.

Meanwhile, most Japanese automakers had previously initiated restructuring plans over the past few years. These companies improved their cost structures and reorganized operations to improve efficiencies. Toyota's European automotive operations returned to profitability for the first time in six years for the fiscal year ending March 2013. Mazda restructured its business when the yen was 100 to the euro. Now at 130 yen to the euro, Europe is contributing significantly to the company's bottom line. On the other hand, Honda had targeted 2013 or 2014 for European profitability. It updated this goal in March 2013, saying that it expects to be profitable by 2016.

In September 2013, Korea based Hyundai said that the company is marginally profitable in Europe. It has delayed its mid-term goal of increasing market share from 3.5 to 5 percent to the end of the decade instead of by 2015.

Several executives have come out in recent weeks with comments indicating that the Western European automotive market has finally hit bottom. However, slow long-term growth is predicted to come. Below are reflections on the market from leading vehicle executives.

Germany and the UK show signs of Improvement; Other top markets still struggling

On a country by country basis, the German economy is expected to continue moderate expansion for 2013-2014. Unemployment remains low for the country at under 7% and household balance sheets are strong. However, buyers remain cautious, leading to relatively flat sales growth expected through 2016. Meanwhile the UK has shown consistent sales gains since 2012, when consumer spending began to recover. Wage rate growth and low inflation are contributing to stronger purchasing power, thereby increasing consumer spending on vehicles.

In the other top markets in Western Europe, high unemployment continues to drag down overall spending. Italy and France are struggling with high unemployment, thereby impacting consumer spending. As a result, car sales in these countries are expected to remain stagnant in 2014, then slightly improve over the long-term as fiscal and wage restraints slowly relax. Despite Spain's unemployment rate hovering near 28%, the country is expected to see moderate vehicle sales growth in 2013. Much of this is due to incentives from a government car scrapping scheme.

Several OEMs have started to address overcapacity problems in their Western European operations. In particular General Motors, Ford Motor, Volvo, and PSA announced plans to shut down vehicle manufacturing plants in Western Europe by the end of 2014. This is in addition to earlier closures of an Opel factory in Antwerp, Belgium, and a Fiat plant in Termini Imerese, Italy. Although this is expected to remove capacity, LMC Automotive believes more has to be done to bring capacity utilization to an acceptable level.

Selected announcements for restructurings and plant closings in Western Europe

Meanwhile, some companies are looking to export markets to improve factory utilization. Specifically, German luxury brands Mercedes and BMW managed to keep relatively stable production volumes during the recession. As LMC states, "With weak demand at home, OEMs are turning to exports to support Europe's production footprint and it is this that has contributed to recent output improvements, with some premium OEMs announcing shorter summer shutdowns to largely support export demand." In particular, strong markets in the US and China have contributed to this demand.

Other European carmakers have announced plans to allocate available capacity toward the production of upscale brands. For example, Fiat plans to add upscale models from Maserati and Alfa Romeo to fill under-used factories. The company is targeting an increase to global unit sales for Alfa Romeo to over 300,000 units by 2016 (compared to 101,000 units sold in 2012). It also wants to increase global unit sales for Maserati to 50,000 units per year by 2015 (over an eightfold increase compared to 6,000 units sold in 2012). Fiat is counting on overseas demand for higher-margin luxury cars to keep workers at under-used Italian factories busy. However, it remains to be seen if the company will reach such aggressive targets. Please refer to the MarkLines report, "FIAT lays out strategy to break-even in Europe by 2016" (June 2013) for more information.

Volkswagen has also looked among its plants to optimize utilization. The company had planned to shut its Brussels, Belgium plant in 2009, but premium brand Audi took over the plant to make its A1 model starting in 2010. In 2011, Audi helped alleviate capacity problems with VW subsidiary, SEAT, by producing its Q3 compact-premium SUV at the Martorell, Spain plant. 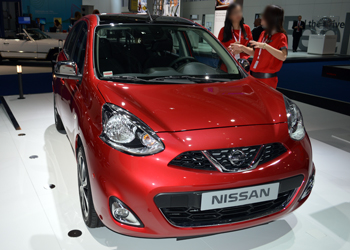 Also, some volume manufacturers are shifting production to Europe as the region becomes more price-competitive. Renault said that it will produce the next-generation Nissan Micra minicar for its alliance partner in Flins, France. This came after reaching concessions with trade unions. The European version of the Micra is currently built the Oragadam (Chennai), plant in India. In 2014, General Motors will build its Opel/Vauxhall Mokka small SUV for Europe in Zaragoza, Spain, rather than importing it from South Korea. Finding new ways to increase factory utilization in Europe could help to address overcapacity that has persisted in the region as individual countries prop up their respective automotive industries.


Long-term production trend for the region is down; German production in positive territory

Looking at the production trends for Western Europe over the period from 2007-2012, the German automobile manufacturers were the only companies to increase production over this period. The strength of exports to overseas markets, and the ability of some premium brands to capture market share from volume producers in Western Europe, contributed to this trend.

Among the other major regional manufacturers, Renault-Nissan, PSA, GM (Opel), Fiat-Chrysler, and Ford Europe all showed double-digit losses during this period as these companies struggled to close plants and reduce shifts. Production was still shrinking for these companies over the 2011-12 timeframe, continuing through the first seven months of 2013. Japanese automakers Honda and Toyota have shown healthy upticks in production in 2011-12.

Premium automakers have been less impacted by the recession due to their global presence and their ability to export to strong luxury markets such as the US and China. This has allowed these companies to invest in the development of new products during the downturn.

Sales for the German premium brands have been particularly resilient with Mercedes, BMW, Audi and Porsche all showing sustained growth since the lows experienced in 2009. Tata's brands are showing mixed results with Land Rover almost doubling sales since 2009, while Jaguar is slowly building volumes. Volvo showed a slight setback in 2012 but is showing signs of life under Geely. Of the major premium European brands, Alfa Romeo showed a significant drop from 2011-2012 but has aggressive plans to triple global sales by 2016 with the release of new products like the 4C.

Several upscale OEMs are also looking to new segments to expand their product offerings. Many of these companies plan to introduce crossovers / SUVs to their product portfolios. They are attempting to combine performance, luxury, and utility in a bid to win buyers away from volume brands. These vehicles will have multiple price points and various sizes.

Examples of future SUV / crossovers and other vehicle introductions

Several traditional volume manufacturers see long term potential in Western Europe. To prepare for this growth, many companies are preparing a barrage of new models and updates in the coming years.