ITS: improving transport systems for the future mobility society

~ Recent initiatives toward the realization of automated driving ~

Intelligent Transport Systems (ITS) is a generic term for the initiatives aiming for solving issues in the traffic field through the utilization of information and communication technology. The ITS development began in the 1980s in Japan, the U.S. and Europe with the primary purpose to reduce the number of traffic congestions and accidents.

Various ITS developments in Japan include the development of Advanced cruise-assist Highway System(AHS), new traffic management systems, and the system construction for collecting and utilizing traffic information. Professional organizations are established and engaged in these ITS developments. ITS Japan works as a nonprofit organization to promote the ITS development through the collaboration among the government, private enterprises and academic institutions.
Currently, more than 54.28 million car navigation systems and 36.53million Vehicle Information and Communication System(VICS) onboard units have been shipped in Japan (as of the end of December 2012), and the Electronic Toll Collection system (ETC) devices are installed on more than 53.14 million vehicles or 88.5% of all vehicles on the road (as of March 2013), which makes Japan as the leading country in the ITS development field. (Source: the website of the Ministry of Land, Infrastructure, Transport and Tourism (MLITT)).

The original objective of ITS development is to improve safety, but it has been expanded to cover various factors such as the global warming countermeasures. More recent development efforts are directed to the driving safety support systems with the vehicle control as well as the provision of traffic information as in the ITS Spot Service and DSSS projects, and the highly automated driving system characterized by platooning of trucks aimed at increasing overall fuel economy.

This report contains the latest progress of the ITS initiatives summarized in the ITS-Japan's figure, "image of the new mobility society" (shown below) and an interview with Professor Sadayuki Tsugawa of Meijo University who has been involved in numerous automated driving projects. The report also introduces the current expansion of information provision service via ITS spots and other infrastructural element investments and the expansion of driving safety support technologies using infrastructure-based information. Furthermore, the latest efforts toward the practical application of the ITS technologies is described including the autonomous driver support technologies based primarily on onboard sensors and current initiatives on automated driving.

The report also compares Japan's progress with those in Europe and the U.S. In Europe, technical development efforts are  made more actively than in Japan under the support provided by the European Commission as part of EC's Seventh Framework Program. Meanwhile in the United States, the Department of Transportation (DOT) has been conducting the evaluations for the infrastructure-cooperative systems.

Finally, the report summarizes several issues that need to be cleared for further expansion of ITS, such as cooperative operation of plural systems and non-technical aspects for future diffusion of automated driving. 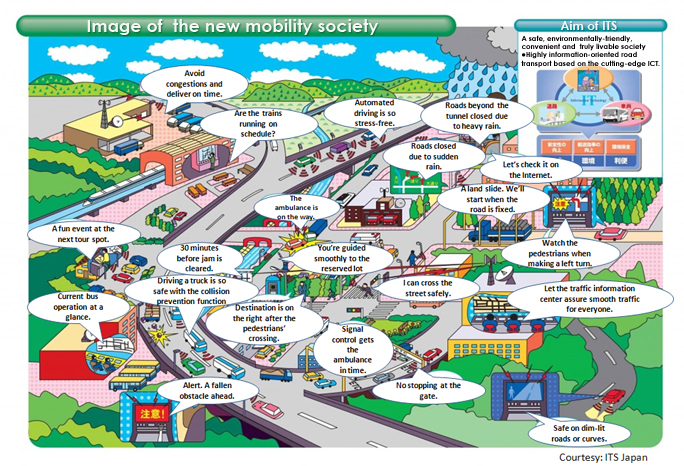 
1. A Summary of ITS technologies

Systems with the ITS technologies are classified into three groups; traffic flow control, traffic information provision, and vehicle control. Their development and operation status are outlined below.

"Traffic flow control" refers to the stoplight control on roads and traffic flow control at toll gates on highways. This group includes the traffic control system currently operated by the National Police Agency to grant the right of way (priority) to the public transportation. Automated toll collection by ETC at toll gates have proven effective in reducing congestions at the gates.

"Vehicle control" is classified under a separate group due to the recent increase in the "platooning" and other new initiatives aiming for the "automated driving." Previous initiatives were mainly for the "driver support" under the category of "infrastructure-cooperative alert and control system.".

The development status of the ITS systems are explained in details below focusing on the following technologies:

* "Car navigation" showing a steady progress in its route search and guidance function based on the collected traffic information * "ITS Spot" and "DSSS" information collection, analysis and distribution systems that contribute to improving the quality of traffic information * "Driver support" systems that have been introduced for practical usage * "Automated driving systems" under very active research and development efforts for practical application in the near future

2. Development status of main ITS technologies

The route search and guidance technology of early car navigation systems relied on "road and facilities information" stored in the onboard memory or "singularity and statistical traffic information" (see Note 1) analyzed from the cumulative data. After the VICS service was put into use in April 1996, the collected and analyzed real-time traffic and road information was sent to the car-mounted devices via three roadside means (radio wave beacon, optical beacon, FM multiple broadcasting) to improve the precision of route search and guidance.

Furthermore, a new service was introduced in 2011 providing traffic and road information using ITS Spot Service that covers a wider area than VICS.

VICS and other real-time information is often used in the car navigation services that provide route search results sent from the information service center via smartphones that are rapidly becoming popular.

(Note 1) Statistical traffic information: Information statistically analyzed the past traffic jam information based on the day   the week, time zones, weather and other factors for use in route search and guidance calculations.

The map shows ITS spot locations installed by the MLITT along national highways. The system sends information about the road condition obtained by roadside units to the car-mounted unit to assist route search and guidance by the onboard car navigation system and provide information to support the driver. The system replaces the conventional ETC service.

The DSSS is a driving safety support system using an optical beacon which is used to transmit traffic information to car navigation systems. It has been deployed in six prefectures (Tokyo, Kanagawa, Tochigi, Saitama, Aichi, Hiroshima) and is to be deployed in other prefectures in the future.

The table below shows the progress of DSSS service and equipment development among automakers.

The "autonomous" type system uses cameras, radar and other car-mounted sensors to detect the car's driving environments and support the driver accordingly. Various types of "autonomous" driver support systems are becoming increasingly available on stock cars. The on-going and new research and development efforts in sensor, control and actuator technologies are expected to make more advanced systems available in the near future (see MarkLines technical report No. 1132 "The future of car-mounted camera-based systems" January 16, 2013).

(Note) Automakers, auto parts suppliers, and communication companies took part in the "Study Group on the Advancement of ITS Radio Systems" that was organized by the Ministry of Internal Affairs and Communications from 2008 to 2009. They exchanged views on the standardization of the "700MHz-band Intelligent Transport System" in 2012. Toyota declared its commitment to "develop a safe-driving support system using inter-vehicles communications," in a lecture during the 4th Automotive Telecommunication Technology Tokyo held in March 2013.

Automated driving systems are developed separately in Japan, the United States and Europe. These systems may be divided roughly into two types: * Platooning of trucks and other commercial vehicles aimed at increased fuel economy * Automated driving of passenger cars in cities (Their ultimate objectives vary from the realization of collision-free vehicles to increased convenience in parking, greater social participation of the handicapped and the aged, etc.)

These development efforts may be classified as shown below from the viewpoint of detection technologies of driving environments.

A self-driving car (driverless car) was developed by a group of automated driving technology researchers from Stanford University. The group has been granted an approval to run tests on public roads in three states in the U.S. where the driverless car is being tested at present. Toyota announced its driverless car reportedly with the similar system configuration as Google's at the Consumer Electronics Show held in North America in January 2013.(Note: Toyota's experimental car is equipped with 360°laser radar along with plural cameras and plural millimeter-wave radar units.)

The development stages of automated driving vehicles among Google, Toyota and other manufacturers, presented below, may be grouped into two types; development efforts aimed at driving on public roads and those aimed at early realization through an extension of existing sensor technologies although the driving scene may be restricted to the highways.


3. Comparison of conditions in Japan, US, and Europe

The development and commercial applications of ITS services somewhat vary among Japan, US and Europe.


4. Outlook of future development and challenges

Trends at the national and the automaker's levels that indicate the direction of future development are introduced below.

The above activities suggest continued progress in various aspects of ITS technologies as predicted below along with a number of challenges that must be tackled.

Although all systems are likely to keep developing, they will face a common challenge of demands among system administrators for the integration of data collection, processing and distribution. Such demands will include mutual distribution of data among government agencies and sharing of data formats. Similarly, private sectors will be asked to make their data available to others toward mutual benefit from shared information. As the distributed data is used in support of drivers, reliability of data will be a critical issue. Consequently, a special system must be developed to ensure timely renewal of data and equipment maintenance.

The 20th ITS World Congress is to be held in Tokyo in October 2013 with 8,000 participants from 60 countries to discuss the present and future development and commercial application of ITS technologies. As the host country of the congress, Japan is to showcase the next-generation cooperative system (ITS Green Safety), advanced provision of information (complementary use of next-generation VICS and ITS spot, etc.) and the futuristic ITS technologies such as automated driving and safe driving support. The upcoming event is expected to reveal the future direction of ITS as well as challenges that need to be tackled.