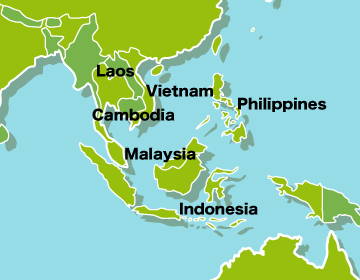 Car sales in Indonesia in 2015 recorded a 16.1% decrease year-over-year (y/y) to 1.013 million vehicles, showing negative growth for the second consecutive year. Between January and May 2016, 445 thousand vehicles were sold, marking a 0.6% decrease y/y. However, in April, sales grew for the first time in twenty months, and a double digit increase was recorded for May. In terms of production, 2015 saw a y/y decrease of 15.4% at 1.099 million vehicles. Between January and May 2016, production recovered by 1.3% y/y to 488 thousand vehicles, and the number of assembled vehicles exported in 2015 grew by 2.7% to 208 thousand vehicles.

In anticipation of a mid-term expansion of the Indonesian market and export growth, Japanese OEMs are currently expanding production facilities and localizing parts procurement. Indonesia’s overall annual automobile production capacity (including non-Japanese OEMs) is expected to increase from 1.5 million vehicles in 2015 to 2 million by 2017. Under these circumstances, Japanese parts manufacturers are expanding their production capacities for the Indonesian market and exports. New product launches have also been taking place. Few new companies have entered the market, with the start of construction for Nippon Steel Sumitomo Metal’s joint venture plant and Sekisui Plastics launch of a new production facility being some of the only examples.

Vietnam is also seeing an expansion of production capacity rather than companies newly entering the market. Manufacturers are expanding their bases for global export through activities like adding plants and facilities to meet the needs of their clients and introducing new products.

In Malaysia, Ube Industries’ joint venture factory for butadiene rubber, a raw material for environmentally friendly tires, has come on stream, and the company has built a global supply system. Polyplastics has added a compound facility for engineering plastics to meet growing demands in the ASEAN, European, and North American markets. GS Yuasa increased its investment ratio  has acquired the management rights to its joint venture company that produces lead-acid storage batteries by increasing its investment ratio in it, and will strengthen the company’s operations. Bando Chemical Industries shut down their local subsidiary for windshield wiper blade rubber and has consolidated production in Thailand.

In The Philippines, TS Tech has established a subsidiary that it commissioned to create and analyze data for automobile seat designs. Nishiyama Seisakusho has established a new facility for manufacturing cold drawn steel tubes.

In Laos, Toyota Boshoku has transferred its entire fabric seat cover sewing process to a plant there from another in Thailand. Yamato Sangyo’s factory for sub-wiring harnesses has come online, and some of the by hand assembly process has been moved from its Thailand plant.

(Source) Created from plans of each company

(Source) Created from plans of each company

Trends of Japanese parts manufacturers in Thailand are to be detailed in a separate report.