The first is the SuperGen, an electro-mechanical supercharger that integrates a starter, generator, and drive power assist, which was developed by Integral Powertrain Technology (IPTT), a joint venture formed by Canada-based Magna International Inc and Integral Powertrain Limited, a British company. The second is a continuously variable valve timing control system called Electric Cam Phaser (ECP), which was developed by the German firm Schaeffler. Both exhibitors displayed their prototypes and gave detailed presentations about the components.

SuperGen is an integral powertrain developed by IPPT that combines an electro-mechanical supercharger with an ISG (Integrated Starter Generator), which is to say it is a single multi-function 12V system that functions as a starter, generator, drive assist motor, and electro-mechanical supercharger. Coupled with the engine start-stop functions, the SuperGen can increase a vehicle’s output by 4 to 6 kW, which contributes to improving engine fuel economy and reducing CO2 emissions.

What makes SuperGen so unique? How is it different from competitors?

A comparable product is an ISG for hybrid systems that integrates an electric assist motor, starter and generator. Various ISGs have been developed by a number of manufacturers and they all offer the following functions:

The mild hybrid functions mentioned here refers to low-part count, low-cost, low-voltage system rather than 100V or other high-voltage systems. The two groups of mild hybrid systems described below have similar structures but have various differences including how they are controlled:

SuperGen is a 12V system like those in group B but its power assist level falls between groups A and B. It is unique in that it offers two different types of power assist; engine starting and supercharge boosting while driving.

② an electro-mechanical supercharger that supplements low engine speed pressure boost, which is lacking in turbochargers

Unlike an ISG, SuperGen has two compact motors that are coupled to each other by a planetary gear mechanism. The two motors are coupled to transmit torque when the engine is started, and decoupled while the vehicle is in motion, which allows them to function independently as a generator and a supercharge booster. The selective use of a planetary gear depending on the engine condition is a unique feature of SuperGen.

SuperGen is designed to replace the alternators in conventional internal combustion engines. This will allow OEMs to easily upgrade existing vehicles to mild hybrids.

✔ when motor E2 is locked, the sun gear shaft no longer rotates and the compressor stops.

✔ when the outer gear is locked, the revolution of motor E2 causes the planetary gear to revolve, and the sun gear rotates in the same direction at a lower speed.

How does SuperGen perform in an actual vehicle?

SuperGen was fitted on a test vehicle and its effect was compared with vehicles that don’t have it equipped.

Fig. 1 Comparison of vehicle speed and acceleration of powertrains with and without SuperGen 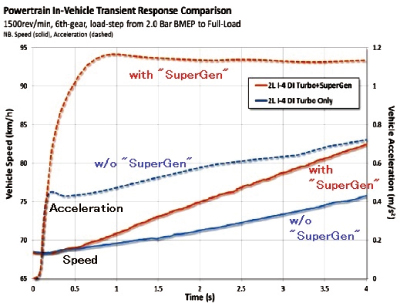 What is the Electric Cam Phaser (ECP)? How is it different from competitors?

Why is an electric system necessary?

Most of the variable valve control is regulated electrically, but even today mainstream designs are configured so the timing (phase angle) of the variable valve mechanism is changed by moving the helical spline along the camshaft through hydraulic pressure regulated by a solenoid valve, which is directed by a controller. A major drawback of hydraulic control is that is does not provide the stable hydraulic pressure needed for cold engine start, restart, and low-speed operation. As a result of this achieving optimal valve timing control is difficult. To solve this problem, a continuously variable valve timing control mechanism based on an electromagnetic clutch was introduced in 2001 by Nittan Valve Co., Ltd. It was integrated in the VQ30DD engine in Nissan’s Skyline Sedan V35. However, the electromagnetic clutch had a large part count, which led to high costs, and in recent years Nissan had a need for a new continuously variable valve timing control that used an electric motor that resolved this issue.

The ECP developed by Schaeffler met Nissan’s requirements, and it was announced during the Exposition that the ECP will be used in the new VR30DDTT engine that will be equipped in Nissan’s Infiniti Q50.

What makes the ECP so unique? How does it differ from the conventional products of competitors?

The ECP developed by Schaeffler is not the first ever electric continuously variable valve timing control mechanism.  Denso achieved that milestone in 2006. The component that was developed is used in the Lexus LS, and its adoption is increasing steadily. Denso is pursuing the integration of intelligent and electromechanical systems and its electric variable timing system has an electric driver unit (EDU) that is integrated with an actuator. However, its housing projects from the side of the engine’s cylinder head, which inevitably increases the physical size.

Unlike Denso, Schaeffler chose to separate its controller (electric driver unit) from the ECP to keep the driver circuit from being heated and allow for easier installation. The compact gearbox also makes the electric ECP as easy to install as conventional hydraulic systems. The signal coupler and electric power coupler are separated from each other in consideration of electromagnetic susceptibility, and to protect the signal circuit from short faults in the coupler. 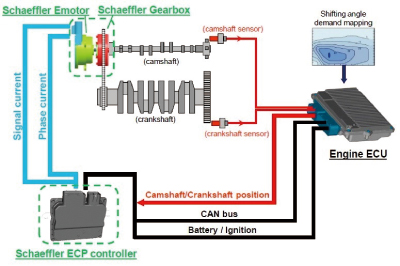 Are there discernible results from electrification?

The results of cold start tests were not reported at the Exposition. However, the waveform at engine start in figure 3 shows that the valve shifted to the cam phase as dictated by the valve timing control before initial combustion of the engine took place after the ignition key was turned on. Figure 4 shows the relationship between the engine speed and the cam phasing velocity of the electric cam phaser (ECP) and the hydraulic cam phaser (HCP). As the graph shows, the phasing velocity of the HCP drops in low ranges due to decompression, but rises again as the engine speed increases. In contrast, the ECP maintains necessary cam phasing velocities from the idling range (500rpm) through high ranges (over 4000rpm).