The following is an outline of Honda Motor Co.'s (1) plans to enhance its HV (Hybrid Vehicle) and mini vehicle families and increase their sales in the Japanese market and (2) product and powertrain development plans for the near future. (A separate report will cover Honda's activities outside Japan.)

(Note) Vehicles with an overall length up to 3.4 meters, width up to 1.48 meters, and height up to 2 meters that are powered by engines with total displacement less than 660cc are classified as "mini vehicles" under the Japanese vehicle regulations, and are eligible for preferential taxation. Because of the affordable prices and maintenance costs, mini vehicles today account for nearly one third of all automobile sales in Japan. This report collectively refers to small, midsize and large-size vehicles other than the mini vehicles as non-mini vehicles.

(1) Honda's plan to enhance its Japanese market includes increasing the number of HV models in Japan to six and the company predicts that HVs will account for 50% of all non-mini vehicles in March 2012 (monthly data) and more afterwards.

In December 2011, Honda launched N BOX, a tall wagon type and the first model of the new mini vehicle N Series. In anticipation of steady growth of the mini vehicle market, Honda has moved the production site of mini vehicles from Yachiyo Industry, a consolidated subsidiary, to Honda's Suzuka Works and is taking steps to sell 280,000 units in FY2012, equal to 40% of 700,000 units, Honda's sales goal of all vehicles in Japan. The company further plans to set up structure for steady sales of 300,000 units.

The N BOX, powered by a new-generation gasoline engine and CVT, is built by a whole-new manufacturing technology that has achieved a 10% reduction in the weight of the white body. Honda will roll out this method to other plants in Japan and other countries for all vehicles including non-mini vehicles.

(2) In November 2011, Honda announced a revolutionary next-generation technology "Earth Dreams Technology" under its product and powertrain development plan. The company aims to introduce top-of-industry fuel efficiency in every vehicle class within three years by replacing its gasoline/diesel engines and CVT and introducing new electric vehicle systems.

Honda's plan with new electric vehicles includes Fit EV launches in Japan and the U.S. in the summer of 2012, and models fitted with 2-motor HV/PHV systems in 2012 to 2013 in addition to those fitted with the existing 1-motor IMA (Integrated Motor Assist) system. Honda exhibited the NSX Concept at the 2012 North American International Auto Show (NAIAS) in January 2012 (to be sold under the Acura brand and fitted with a newly-developed hybrid all-wheel-drive system). Honda has aspired to give a new try to building automobiles with personality and has decided to resume development of the successor model to NSX as the symbol of such aspiration.

At the same time, Honda announced North America will be the development and production site of the Acura brand and the company will refresh all existing models within three years.


Honda predicts HVs will account for 50% of all non-mini vehicle sales in March 2012 (monthly data), and even more afterwards

Honda currently has six hybrid models in the Japanese market, including the "Freed HV" and "Freed Spike HV," Japan's first HV in its minivan and tall wagon families within the small-medium category.

(Note) Fit Shuttle is sold in Japan exclusively and is set for the series sales of 4,000 units a month. Released for sale on June 16 and won over 12,000 pre-orders in two weeks of which 86% were for HV.

engine available) November 2011  Insight hybrid model was refreshed after which the fuel efficiency of the car fitted with the conventional 1300cc engine improved by 1km/L from 30km/L to 31km/K (10-15 mode), best among Honda's hybrid vehicles. "Insight Exclusive" fitted with a 1500cc engine and the IMA system (10-15 mode fuel efficiency of 26.5km/L) was made available. Honda positions "Insight Exclusive" as a higher ranking model with finer interior and external qualities.

In December 2011, Honda launched tall wagon type models N BOX and N BOX Custom, the first models in its new mini vehicle N Series. The company plans to launch the N Concept 3 with rear seats having a greater degree of freedom (exhibited at the Tokyo Motor Show) in the spring of 2012, N Concept 4 (a sedan resembling the old time hit known as N360) in the fall, and N Sports (tentative title) in 2013. The "N" derives from the N360 released in the 1960s and, according to Honda, it also represents its resolution to once again enhance its mini vehicles.

Honda will move the site of its mini vehicle production from Yachiyo Industry to Suzuka Works, and set up its network of dealerships that mainly sell mini vehicles and compact cars under the policy of rebuilding its mini vehicle business. 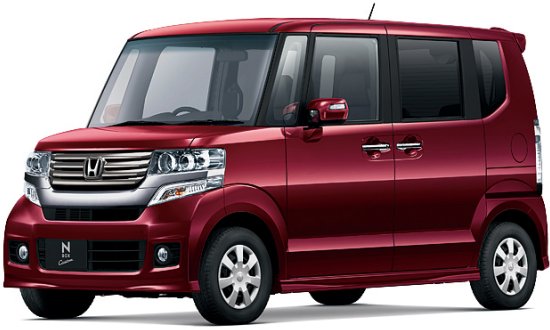 mini vehicles to be manufactured at Suzuka Works

Source: Honda press release 2011.11.30 (Note) N BOX is a tall type model designed for spaciousness that rivals Daihatsu Tanto and other models. Although its fuel efficiency is not as high as that of Daihatsu e:S, Honda reportedly will enhance the N Series and launch a new model, in 2013 at the earliest, with JC08 fuel efficiency of over 30km/L.

In the course of developing N BOX, Honda reviewed every stage of production and adopted advanced technologies that included a high-efficiency welded frame using an inner frame, and an ultra-strong stiffener using tailored blank and hot stamping of molded trim. As a result, Honda achieved a 10% weight reduction from the N BOX white body. One of the two production lines at Suzuka Works was modified to use the new method. The new production method will be used in other plants in Japan and overseas with mini vehicles first and eventually with all models. It is said more than 10% weight reduction is possible with non-mini vehicles that weigh more than mini vehicles.

The "high-efficiency joint frame using an inner frame" method is outlined below.

Source: Honda's monthly release of production, sales and export (Note) The ratio of mini vehicles to total sales in Japan (non-mini vehicles + mini vehicles) was 34.8% in 2010 and 36.1% in 2011 (calculated from Japan Automobile Dealers Association data).

Honda has production capacity of 1.3 million vehicles in Japan and plans to maintain annual production of 1 million units. The company produced approximately 910,000 units in FY2010 of which 310,000 units (34.0% of production) were exported and 610,000 units sold in Japan.

Honda is under the pressure of the yen's hovering appreciation and impending need to further localize its development and production operations in emerging markets. This makes it hard for Honda to increase export even if production is normalized. Honda thus faces an urgent need to increase sales in the mini vehicle market that represents one third of the market in Japan if the company is to maintain its adequate production quantity in Japan.

In November 2011, Honda announced revolutionary next-generation "Earth Dreams Technology" covering six items including gasoline/diesel engines, CVT, and various types of electric drive technologies. Honda is set to satisfy both of the driving performance and fuel efficiency to the highest levels and achieve top fuel efficiency in all categories within three years.

As for electric vehicles, Fit EV will be launched in Japan and the US in the summer of 2012 which, Honda claims, will mark the best "electric efficiency" (the amount of electricity required to run a specific distance). A new hybrid system for mid- to large-size vehicles using two motors for driving and power generation has been newly developed. A PHV fitted with this system will be launched in 2012 and a HV version will go on sale in 2013. Honda has also developed a new electric four-wheel drive system.

(Note) The electric servo brake system on Fit EV decelerates the vehicle using the regenerative brake alone without the mechanical brake so long as the regeneration capacity of the electric motor is not exceeded. According to Honda, this system increases the amount of energy regeneration and electric power efficiency thereby increasing the cruising range. The system switches to the mechanical brake instantly when it is needed. Source: Honda's press release 2011.11.30, Automotive News 2011.12.5

Honda exhibited three Acura brand models, the ILX concept, a second-generation RDX and the NSX successor concept, at the North American International Auto Show held in January 2012. All three models are developed and will be produced in the United States.

Honda considers North America as its site of development and production for the Acura brand, and will remake all models within the next three years. Honda will enhance the brand in North America and China where the brand is marketed, and roll out similar marketing to the United Arab Emirates, Saudi Arabia, Russia, Ukraine, etc. in 2013 and later.

Honda's exhibit at the 2012 NAIAS included the next Accord model being launched in the fall of 2012.

Among vehicles other than HV and mini vehicles, Honda released CR-V for sale in December 2011 and will launch the next Fit in 2014.

Product launch other than HV and mini vehicles


Operating loss in automobile business registered for April-September in FY2011

Honda reported a net profit of 534 billion yen in its consolidated statement for FY2010, bringing the company up to the top position among the listed companies in Japan, whether automotive or non-automotive.

But Honda's global unit sales in April-September in FY2011 fell 26.6% from 1.8 million units in the same period a year earlier to 1.32 million units due to the influence of the great earthquake in March. This led to the revenues of 3,600.4 billion yen (down 22.0%) and operating profits of 75 billion yen (down 81.1%). The company's automobile business ended the quarter with an operating loss of 105.3 billion yen. Saying it was difficult to forecast the financial results for the full FY2011 due to the influence of the flood in Thailand which is likely to last through the end of this fiscal year, Honda withdrew the forecast announced on August 1 as part of the statement for the April-June of FY2011. The company reported "undecided" under the full-year forecast including the unit sales.