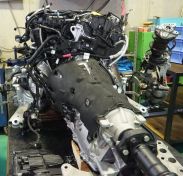 On July 7, BMW announced that new BMW 2 Series Coupé embodies sporting prowess in a particularly concentrated form, with a vehicle concept focused squarely on dynamic excellence, an athletic design, powerful engines and sophisticated chassis technology.
World premiere at the Goodwood Festival of Speed in July 2021. New model will be built at the BMW Group’s San Luis Potosí plant in Mexico. Market launch at the beginning of 2022.
Launch line-up will be spearheaded by a high-performance model from BMW M GmbH: the BMW M240i xDrive Coupé with a 275 kW/374 hp six-cylinder in-line petrol engine and intelligent all-wheel drive. There will also be a choice of four-cylinder petrol and diesel models whose power is transmitted to the rear wheels.
Powerful and efficient engines featuring the latest BMW TwinPower Turbo technology. Six-cylinder in-line power unit in the new BMW M240i xDrive Coupé develops a maximum output that is 25 kW/34 hp higher than in the outgoing model. Further improved four-cylinder petrol engine in the new BMW 220i Coupé with 135 kW/184 hp and minimized  emissions thanks to cylinder head with integrated exhaust manifold. New BMW 220d Coupé features a 140 kW/190 hp four-cylinder diesel unit with two-stage turbocharging and 48V mild-hybrid technology for instantaneous power delivery and high levels of efficiency. The new BMW 230i Coupé powered by a 180 kW/245 hp four-cylinder petrol engine will be added to the range in summer 2022.

On June 9, BMW Group announced that the all-new BMW 4 Series Gran Coupé courtesy of BMW M GmbH will be available from the car’s market launch (due to get underway in November 2021) alongside four other model variants.
All will be built under a flexible manufacturing process at BMW Group Plant Munich.
Measuring 4,783 mm in exterior length, 1,852 mm in width and 1,442 mm in height, it has distinctive proportions combined with dynamically stretched coupé lines. It is 143 mm longer, 27 mm wider and 53 mm taller than its predecessor. The wheelbase of 2,856 mm is 46 mm longer than the predecessor’s.
The new BMW 4 Series Gran Coupé offers 470 liters of boot space, the primary capacity in the directly viewable area of the boot having grown by 39 liters. Load capacity can be expanded to a maximum of 1,290 liters by folding down the sections of the rear backrest, with its standard 40: 20: 40 split.
The new BMW 4 Series Gran Coupé underscores its vividly enhanced sporting credentials with a performance model at the top of the range.
The BMW M440i xDrive Gran Coupé is powered by a 275 kW/374 hp six-cylinder in-line gasoline engine.
The BMW 430i Gran Coupé gives a debut to a new four-cylinder gasoline engine which develops 180 kW/245 hp and has an exhaust manifold integrated into the cylinder head to further reduce emissions levels.
The four-cylinder gasoline engine in the BMW 420i Gran Coupé produces maximum output of 135 kW/184 hp. And a 140 kW/190 hp four-cylinder diesel engine can be found under the bonnet of the BMW 420d Gran Coupé and BMW 420d xDrive Gran Coupé.

All news
View all news relating to Exhaust Manifold