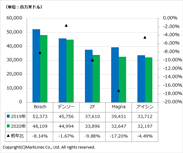 On September 22,  STMicroelectronics introduced a new generation of automotive intelligent switches- VN9D30Q100F and VN9D5D20FN, the first in the market with digital current sensing among the fully digital on-chip diagnostic features. Designed for high-side connection in applications powered from a 12V battery, the drivers simplify the hardware and software design of electronic control units (ECUs) and enhance system reliability.
The new devices leverage ST’s latest-generation of VIPower M0-9 technology to combine an efficient 40V trench vertical MOSFET with 3.3V digital logic, and high-precision analog circuitry in a 6mm x 6mm QFN package. Their compact dimensions and high integration save up to 40% of PCB area compared to comparable driver ICs already in the market.
The VN9D30Q100F has two 33mW and two 90mW channels. The VN9D5D20FN has two 7.6mW and two 20mW channels. Each has up to six output channels and a 4-wire SPI interface, which reduces the number of microcontroller I/O pins needed to interact with the device. The diagnostic circuitry has a continuously running analog-to-digital converter (ADC) with 10-bit resolution and 5% precision. These new devices simplify AUTOSAR compliance by providing a complex driver that operates independently from the application, thereby also easing software development.
(STMicroelectronics press release on September 22, 2021)

On September 15, Hyundai Motor said that its Asan plant, which resumed operation on the 13th, stopped again after it had stopped due to a supply disruption of the engine control unit and resumed its operation.
According to Hyundai Motor, Asan plant would be shut down from today to the 17th due to disruptions in the supply and demand of automotive semiconductor parts.
However, the scheduled resumption of production at the Asan plant is the 27th in consideration of the Chuseok holiday next week.
According to the industry, a Malaysia-based partner that supplies semiconductors applied to engine control units (ECUs) has recently stopped operating its factories, resulting in a disruption in ECU supply.

Continental AG announced that more than 350 million airbag control units (ACUs) have been manufactured and it is developing new functions to further optimize the protective effect of airbags in cars. Under the motto “Allround Protection”, the two perspectives around the vehicle (“Pre-Crash Safety”) and into the vehicle (“Occupant Safety Monitoring”) will be networked more closely in the future in order to adapt the airbag deployment strategy more closely to the situation, the occupants and their position. A modern ACU controls up to 48 ignition circuits, in future, this number is likely to increase even further. The performance of an ACU varies depending on the segment, vehicle and equipment, meaning such ECUs are scalable. Continental is implementing this with three modular variants of its airbag control unit. Depending on the version, the control units offer basic functions for frontal and rear impact protection through front airbags and belt tensioners up to additional functions for updates-over-the-air, cyber security and crash detection even during the charging process of electric vehicles. In order to be able to control the filling level of the airbag more selectively depending on the occupant position, an airbag control valve is in pre-development. This new valve has the dynamics to control the gas flow into the airbag in just a few milliseconds. Continental also includes the sensing of the battery in electric cars in the planning in order to warn the driver of possible battery damage (and thus fire risk) after bumps or rockfalls. It can also be integrated into the airbag control unit in the future. The contact sensing CoSSy (Contact Sensor System) is under development for very light damage and contacts. The system detects and classifies sound signals, such as an impact at low speed, so that the vehicle can be stopped immediately. (From a press release on August 26, 2021)

All news
View all news relating to ECUs